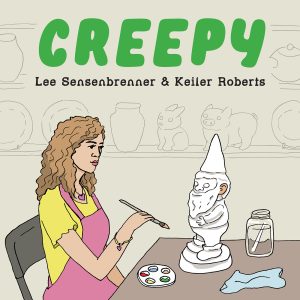 Siblings and UW–Madison alumni Keiler Roberts and Lee Sensenbrenner recently released the multi-generational graphic novel, “Creepy,” which is described as a “picture book for grown-ups.”

Roberts (illustrator) earned her BFA from the School of Education’s Art Department in 2000, and Sensenbrenner (author) earned his BS in economics in 1997. Their book was released on Oct. 25, 2022, and is featured on the Children’s Book Council’s anticipated bestsellers list.

Roberts is an award-winning illustrator who has also published books including, “Powdered Milk,” “The Joy of Quitting,” and “Sunburning.”

The Drawn and Quarterly preview of the book describes it as “a compelling — and downright creepy — modern fable about kids who are hooked on their digital devices.” The preview adds that the authors “provide a shrewd and comical commentary on the increasing digitization of childhood.”