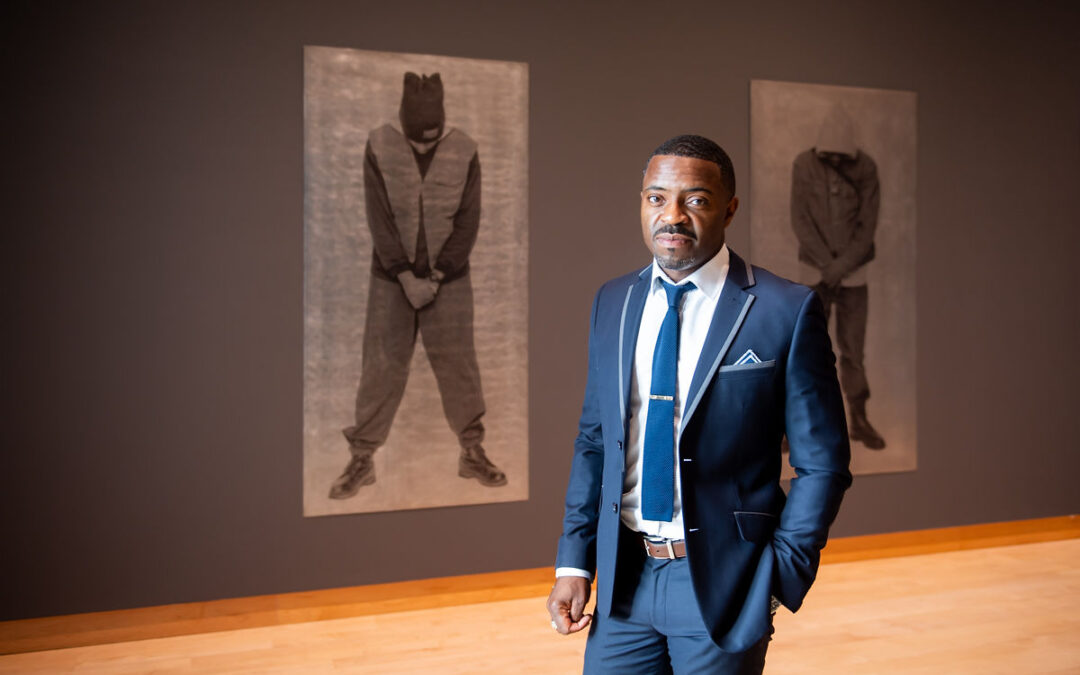 On an exchange visit to the United States as a teenager, Londoner Paul Anthony Duffus “was impressed with how Islam was a tool revolutionizing the lives of Black Americans,” he said in a telephone interview after the opening Friday of his exhibition “Dark Matter” at the Madison Museum of Contemporary Art. He familiarized himself with Malcom X’s journey of self-discovery and others who had similar stories. He felt inspired to take his own.

“Islam addressed who you are,” he said. “I realized I did not have a name that aligned with my identity. That’s when the ball started to roll.”

At 19, he returned to an England where a “huge awareness was growing, and men and women were finding a new place and identity.” Duffus made his Shehadeh, the Muslim declaration of faith that there is one God and that Muhammad is his prophet. He adopted a name for himself, chosen by a sheik in South London, “that better suited” him–Faisal Abdu’Allah.

In the 30 years since, Islam has impacted his life and his art. “The discipline, changing the sleeping habit to get up early for prayer, praying five times a day, eating differently, changing my social circles, reading Arabic,” he listed. “It did not introduce different principles. It calls on us to be generous, kind, good,” as did the lessons he learned from his father, a Christian minister.

With “Dark Matter,” the British-born, Wisconsin-based artist, barber and professor invites the public to witness his self-transformation and consider their own. The exhibit at MMoCA, 227 State St, Madison, runs through April 2. It examines issues of personal identity, cultural representation and self-determination in ways that are both nuanced and provocative.

Abdu’Allah is Professor of Printmaking and Associate Dean for the Arts in the School of Education at the University of Wisconsin-Madison. In 2021, he was named the Chazen Family Distinguished Chair in Art at UW-Madison. He studied in London at the Royal College of Art.

In an interview with former MMoCA curator Leah Kolb, she spoke to the uniqueness of Abdu’Allah’s work. “What distinguishes his work from other figurative work  and identity work currently going on in contemporary art is the level of thoughtfulness and the concepts he brings as well as the materiality.”