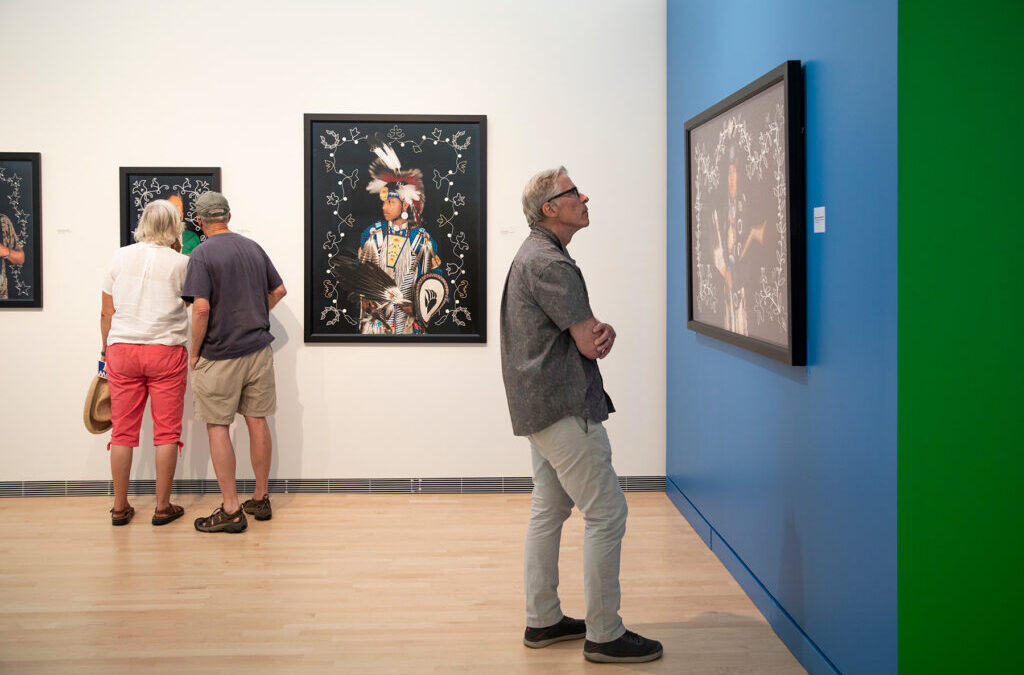 Over the past few weeks, the Museum of Wisconsin Art (MOWA) in West Bend has opened two new exhibitions by indigenous artists to the public.

Curator Graeme Reid says MOWA has worked with Jones for the past 13 years, and that a constant thread in Jones’ work is the interaction between white and Indian culture. Jones’ series “Studies in Cultural Appropriation” examines the fashion industry’s use of Native American designs. It includes an image of a white man and white woman, with  the outline of the man’s clothing cut out. The space is filled in by laying the card over Native objects such as beadwork, cloth and weavings.

“There’s something that a friend of mine said once,” says Jones, a professor of photography at the University of Wisconsin-Madison. “She came to a show, and she’s like, ‘Your work is so beautiful, but then when you really look at it and get up on it, it slaps you in the face.’”

Both Jones’ exhibition and White Earth Nation painter Tom Antell’s paintings deal with the legacy of their tribes’ lost land.

“It’s an odd thing because someone could look at that painting and just see it as a painting of a plowed field,” Antell said. “But when you understand that it was painted by a Native American, it probably is going to take on a different context.”

Jones said his exhibition’s name refers to how Ho-Chunk people were removed from Wisconsin by the United States government and later returned.

“And so I decided to say, ‘Here We Stand’ to let people know that we are still on our original homeland,” Jones said.

Jones’ work has been featured in the Smithsonian’s National Museum of the American Indian and the Museum of Contemporary Photography at Columbia College Chicago. He’s been photographing his tribe since 1998, and he’s not sure he would have the same access to their homes if he wasn’t a member of the community.

Read more at The Wisconsin Examiner