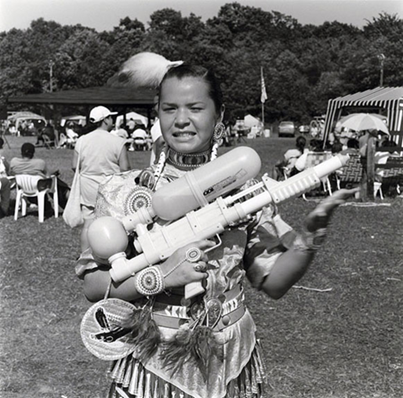 The first major retrospective of work by UW–Madison’s Tom Jones, an award-winning contemporary photographer and professor of photography in the School of Education’s Art Department, will be on view at the Museum of Wisconsin Art (MOWA) in West Bend, Wisconsin, from July 23 – Oct. 9.

Titled “Here We Stand,” the exhibition features 120 photographs from 16 bodies of Jones’ work spanning 25 years of the artist’s career. According to a press release, while each series is distinctly different in subject and photographic medium, Jones has remained consistent: Native American peoples are not vanishing, assimilating, or frozen in time. Native American communities are diverse, changing, and multidimensional with a commitment to family, land, and tribal community. Working as an “insider” as a member of the Ho-Chunk Nation, Jones deploys the lens of contemporary photography to explore personal and deeply felt issues of race, identity, and cultural appropriation.

“Unlike the photographers of late 1800s and early 1900s such as Edward S. Curtis whose staged scenes captured a romanticized Indian culture, Jones’ portraits are firmly anchored in present day,” said MOWA Director of Exhibitions Graeme Reid who curated the exhibition. “As an ‘insider’ his photography offers a counter-narrative to the traditional depictions of Indigenous culture.”

“My mission is just to get more visibility for our people,” explained Jones in a recent feature story about him that was published in the Wisconsin State Journal. While the Ho-Chunk were the original inhabitants of the Madison area, he said, “We were removed over seven times by the government, further west to various places.”

“But they just kept coming back,” he said. With his new show at MOWA, “I really want to show that we’re still here. That’s why I decided on the title ‘Here We Stand,’ because it’s a gesture (showing) that we’re still on this land.”