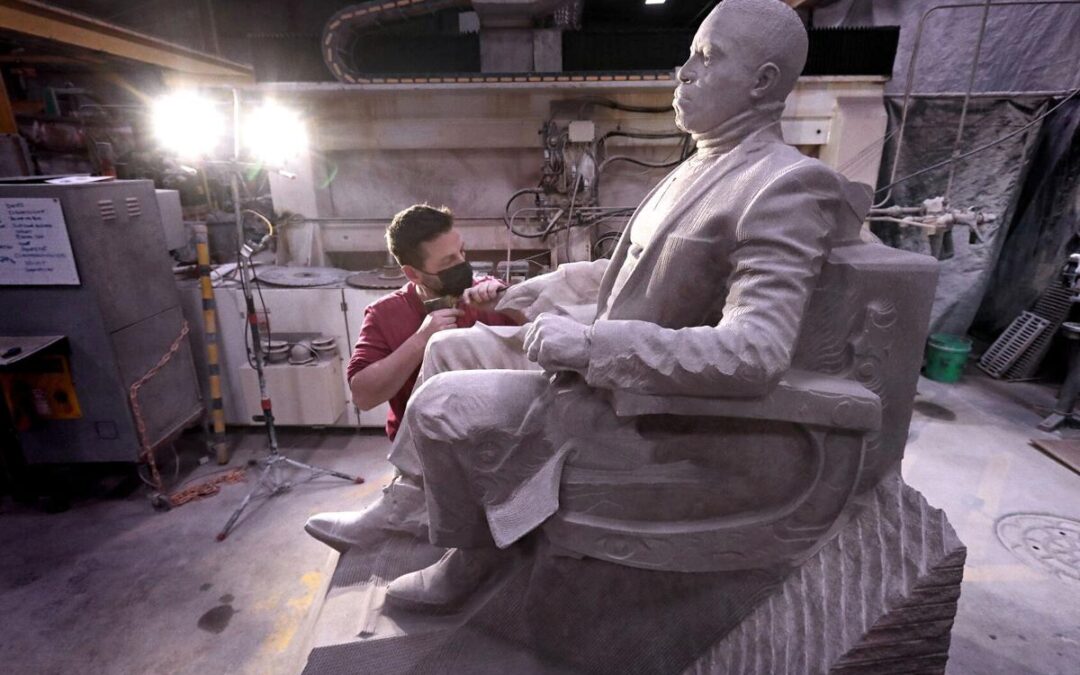 By the end of this month, visitors will see a new landmark on State Street: A 12,000-pound sculpture near the corner of Henry and State, just outside the glass prow of the Madison Museum of Contemporary Art.

Stoic, watchful, the life-sized seated figure depicts the artist himself, Faisal Abdu’Allah, an artist, barber and professor of printmaking and the Chazen Family Chair in Art at UW-Madison.

The sculpture recalls the famous monuments depicting Abraham Lincoln, both at the Lincoln Memorial in Washington, D.C. and just up the street on Bascom Hill on the UW-Madison campus. But in this case, Abdu’Allah is seated in a barber’s chair — carved from Indiana limestone — and symbolic of the place where he has formed bonds, celebrated culture and learned about life in his boyhood London.

“Blu³eprint,” as the yet-to-be-installed artwork is named, is a precursor to the September exhibition of Abdu’Allah’s work at MMOCA titled “Dark Matter.” Prior to that, in April, MMOCA is breaking with convention to host its prestigious “Triennial” show — not as the traditional survey of Wisconsin artists that the Triennial has been known for, but with an exhibition of artworks created solely by Black women artists from across the Wisconsin. Fatima Laster, a gallery owner from Milwaukee, is guest curator.

Beyond this Downtown corner, the landscape for Black artists in Madison is changing. Long-established white-dominated institutions are diversifying the offerings on their stages and gallery walls. The proposed Center for Black Excellence and Culture on Madison’s South Side, with more than $10 million of a $36 million fundraising goal achieved, is expected to open in 2023. And with it, artists are anticipating a new home where they have the space and community to make art.