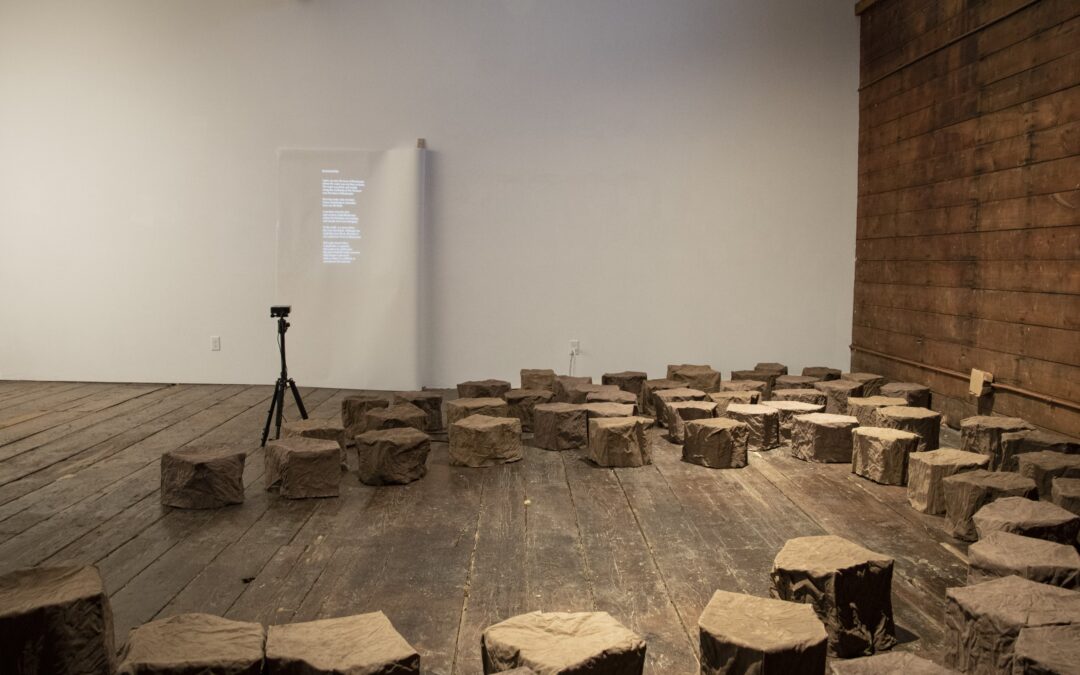 In loss, what is left? This is the paradox artist Helen Hawley explores in Drained Lake, an exhibit that materializes what is no longer there by filling the space with oil paintings of dismembered body parts, a poem titled “Blackwater” projected with light, and hundreds of representations of lake sediments, all made out of canvas and clay paint. The show runs through February 20 at Abel Contemporary Gallery in Stoughton. Hawley tells us of the past by converting the gallery space into dried lake bed gaping with emptiness. In its entirety, the exhibit is about water, language, loss, and most importantly the human condition, which copes with the perpetual state of absence.

Upon entering the exhibition, visitors will hear the piercing sound of a solitary horn. Czech composer Miroslav Srnka’s “Korone” resonates over the speakers, creating a melancholic and wistful atmosphere. The melancholy also emanates from “waterlines,” a close-up painting of a lake with deep azure shadows and ghost-like light gray highlights. Hawley’s interest in bodies of water started when she grew up in rural Missouri, 200 yards from a creek and two miles from the Missouri River. From her childhood home, she would hear the sound of moving water, which she describes as her siren song, because it pulls her in. This motif reoccurs in the work she later produced during her time at the Rhode Island School of Design as an undergraduate student and at UW-Madison as a graduate student. Water at times plays a direct physical role in the creation of Hawley’s work: Her 2019 show The Blues Of The Rain, at the Watrous Gallery, included a “rain journal,” consisting of inked pages Hawley set outside during rainshowers, letting the rain itself alter the work.

At the center of Drained Lake are dozens of terracotta installations, which Hawley sewed from heavy canvas, dipped in custom-made clay paint, and wrung out. Once the pieces dried, the process created rough textures that mimicked the consistency of mud. These individually unique forms are hollow inside, with chipboard scaffoldings that hold the canvas up. “These natural materials are dug from the earth,” Hawley says about choosing clay as a medium to make existing and changing forms. The modifiable nature of clay allows it to take up a different structure according to what is demanded from it. Hawley was inspired by the natural formations found on the floor of a dried lake, because the irregular cracks create a pattern that is organic in nature. The landscape is a critical influence in her work.