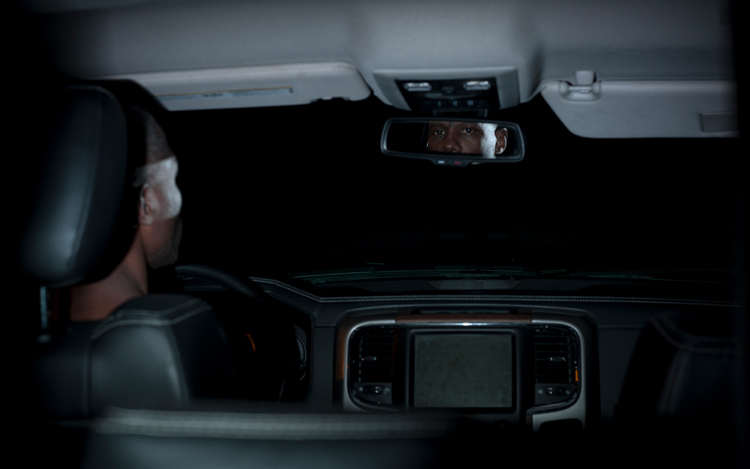 A native New Yorker, Jonathan Calm is a visual artist who works in photography, video, installation and performance. His earlier work primarily focused on the socio-cultural, historical and geopolitical imprint of public housing on both sides of the Atlantic, putting into perspective, questioning and imploding the utopias of Modernist architecture as idealized white spaces redolent of hidden narratives and forgotten participants.

More recently, he extended his art practice toward creating work that relates to the complex visual representation of African American automobility. This ongoing, expanding project was inspired by a trip through the American South he was invited on in June 2016 to take photographs for a BBC radio documentary on the Travelers’ Green Book (published 1936-66), the unique guide that provided information on secure and dignified accommodations for black Americans during the last three decades of the Jim Crow era.

Drawing on this research, Calm has produced a body of work that explores the importance and resonance of the Green Book from an at once historical and contemporary perspective. He looks into the ways in which its publication reflected black upward social mobility through car ownership, and traced a trajectory of empowerment fraught with hazard that played a major role in the struggle of the Civil Rights movement and could not be more central to the exposure to violence at the hands of law enforcement faced by young people of color on the road today.

Calm has lectured on his Green Book journey at the Museum of Art & Design in New York City, published an essay on two photographs he took of the most famous of its ‘safe places,’ the Lorraine Motel (where Dr. Martin Luther King, Jr. was assassinated), in a special issue of ART21 Magazine, commenting on the narrative of African-American automobility and the dangerous freedom of the open road when ‘driving while black’. During the first half of 2018, his ‘African American Automobility’ exhibit was on display at Stanford Art Gallery, and it is currently showing at Fisk University’s Carl van Vechten Gallery.

Calm’s art has been exhibited in galleries and museums around the world, including the Museum of Modern Art, Tate Britain, the Museo Reina Sofia, the Studio Museum in Harlem, the Jersey City Museum, the Wadsworth Athenaeum Museum of Art, the Smithsonian Institute, the Chelsea Art Museum, . Numerous publications, among which The New York Times, Art in America, The New Yorker, The Village Voice, Artforum and The Washington Post, have given significant mention to his output. Calm received his BFA from Montclair State University in 1997 and his MFA from Columbia University in 2000. He is an Art Matters grant recipient and assistant professor in Art & Art History at Stanford University, where he has been since 2015. jonathancalm.com