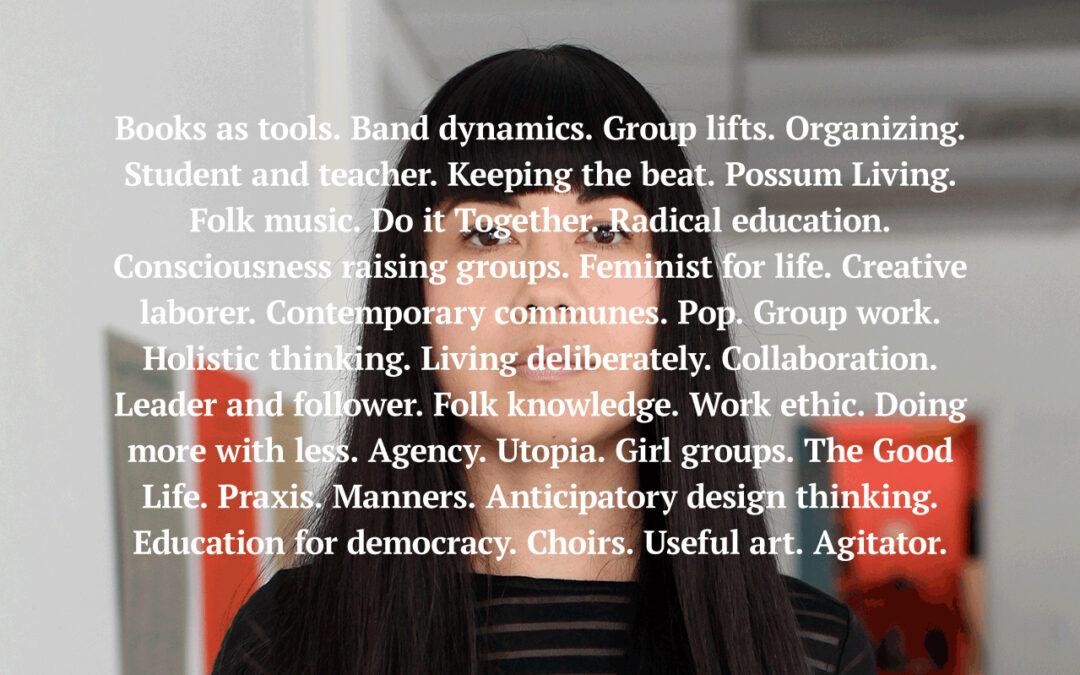 Jen Delos Reyes is a ‘farmer of sorts and an artist of sorts’, educator, writer, and radical community arts organizer. She is defiantly optimistic, a friend to all birds, and proponent that our institutions can become tender and vulnerable. Her practice is as much about working with institutions as it is about creating and supporting sustainable artist-led culture.

Delos Reyes was born in the city of Winnipeg, Manitoba, Canada, and educated first in its local music scene of the mid-90’s infused with the energy of Riot grrrl and DIY, and then in its university. How she works today is rooted in what she learned in her formative years as a show organizer, listener, creator of zines, and band member. Graduate work at the University of Regina made the space possible for her to see her work as an organizer as a key component of her continued creative work.

Delos Reyes worked within Portland State University from 2008-2014 to create the first flexible residency Art and Social Practice MFA program in the United States and devised the curriculum that focused on place, engagement, and dialogue. The flexible residency program allowed for artists embedded in their communities to remain on site throughout their course of study. She worked with the Portland Art Museum from 2009 to 2014 on a series of programs and integrated systems that allowed artists to rethink what can happen in a museum, and reinvigorate the idea of the museum as a public space. In 2015, Delos Reyes became the Associate Director of the School of Art & Art History of the University of Illinois, Chicago’s only public research university, where she teaches in the departments of Art and Museum and Exhibition Studies. She was the Director and founder of Open Engagement, an international annual conference on socially engaged art that was active between 2007 to 2018 and hosted ten conferences in two countries at locations including the Queens Museum in New York. After over a decade of large scale organizing she is now focused on work on the scale of her life.

She is the author of I’m Going to Live the Life I Sing About in My Song: How Artists Make and Live Lives of Meaning, a book exploring the artist impetus toward art and everyday life, and Everything You Ever Wanted to Know About Public Engagement But Were Afraid to Ask.

Delos Reyes is currently in Chicago, Illinois where she is living at SIDE by SIDE, a future residency for BIPOC arts and culture leaders and artists to rest and rejuvenate, and cultivating Garbage Hill Farm, the onsite CSAA program that supports the endeavor. The small scale urban farm houses goats, a chicken coop, fruit trees, and native pollinator and bird gardens. The residency offers deeply rooted space for artists to rejuvenate, while meaningfully connecting with neighbors and the Chicago arts community through intimate public programming. This project models personal and social sustainability and that our daily lives and arts and culture can and should exist side by side. jendelosreyes.com