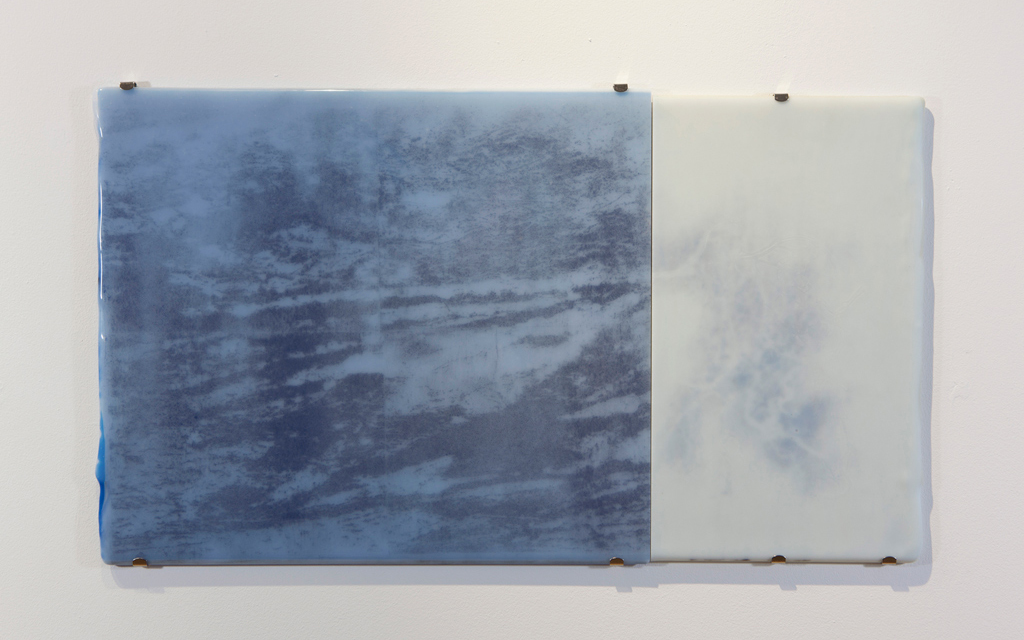 Carrie Iverson is a printmaker and glass artist who often combines both media into multi-part installations. She strongly believes in the importance of art in public spaces, and has created several large-scale projects in reaction to the US/Iraq war. The first of these, The Façade Project, was a memorial to the US soldiers who died in Iraq. Installed in the windows of a three-story warehouse building on the west side of Chicago, each window contained the faces of nine US soldiers. Altogether, the piece showed the faces of six hundred forty eight of the troops as a tribute and reminder. Located on a busy street and next to a train stop the piece became a part of the community, invoking curiosity and conversation during its ten year installation (2004-2014). In 2006 she created a second version of the piece, Wake, which included the Iraqi dead as well as the US soldiers. First installed in the Phyllis Stigliano Gallery (Brooklyn, NY), it was then remounted in the lobby of the main Brooklyn Public Library where it was visible to everyone who entered and exited the building.

In addition to these memorials, she has also created a series of more introspective installations in both galleries and unconventional spaces. These projects typically begin with an extended period of research about a concept or process, which then evolves into a complex network of interrelated ideas that relate and resonate with the original starting point. Her explorations have led her to investigate such diverse topics as dust, metaphysics, and surveillance systems. The unifying thread in all these projects is a fundamental interest in interaction, in drawing attention to how there is rarely one fixed visual experience but instead a series of encounters that shift depending on perspective.

As part of her studio experiments, Iverson developed the image transfer for glass process, an innovative technique which uses principles from lithography to create a print composed entirely of sheet glass and glass powder. She has subsequently continued to develop this process in her own work, and to teach it at many studios in the US and around the world. Her interest in family history has also encouraged her to continue her experiments with glass; her grandfather was a research chemist specializing in glass who helped develop bullet proof glass, mirrored glass, and float glass. This scientific tradition has influenced her approach to her experiments; although her research may lead her in tangential directions, it is always grounded in methodical documentation.

Currently she is exploring incorporating film within her work, while continuing her experiments with printmaking, glass and found objects. She now resides with her husband Jeremy Scidmore in Dallas/Fort Worth where they maintain their studio and teach classes in glass and printmaking.

Iverson was raised in rural Virginia, attending Prince Edward County Public Schools from 1978-1990. As one of the plaintiffs in the landmark civil rights era case of Brown vs. Board of Education, the school’s case was the only one put forward by the students themselves. The school system then became infamous for shutting down for five years (1959-1964) as the county resisted desegregation. Iverson and her sister both attended the school system after it reopened as an integrated, though still primarily Black, public school. That childhood experience of incremental activism has shaped her approach to her publicly engaged projects, leading her to focus on connecting with the community where she works in depth.

Iverson received her BA from Yale University in 1994, with honors in studio art. While there she focused on painting and printmaking, designing her own course of study to produce a limited edition artist’s book of etchings and writing. She received her MFA in 1998 from The School of The Art Institute of Chicago, where she focused on digital offset printing and artist’s books. Her print work is in many private and public collections, including The Art Institute of Chicago (Chicago, IL), Brooklyn Museum (Brooklyn, NY), The Museum of Modern Art, (New York, NY), the Museum of Contemporary Art (Chicago, IL), and the Virginia Museum of Fine Art (Richmond, VA). carrieiversonstudio.com