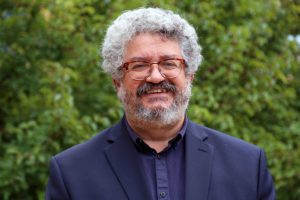 A book of literary philosophy by UW–Madison’s John Baldacchino was a finalist in the Literary Nonfiction category for Malta’s National Book Prize.

Baldacchino is a professor of art and education within the School of Education’s Art Department.

Written in his mother tongue, Maltese, “Sejjieħ il-Ħsieb: Limitu u Ħelsien” (Rubble Walls of Thought: Limits and Freedom) is Baldacchino’s first book of philosophy. The work takes a poetic yet rigorous approach to explore the relationship between freedom and the “limit,” and invites readers to explore and dialogue with key concepts of ethics, politics, literature, and epistemology.

Baldacchino delivered a lecture in English for the University of Malta’s Mediterranean Institute about the book in Nov. 2021, which is available via YouTube. In a preview for the lecture, Baldacchino says that writing a book “of” (rather than “about”) literary philosophy in Maltese became for him, in many ways, “a linguistic affair.” He explores in the lecture how “doing philosophy” in Maltese “brings one to engage with disciplines in which one was entirely educated in other languages” and “opens up new opportunities that move inwards as well as outwards.”