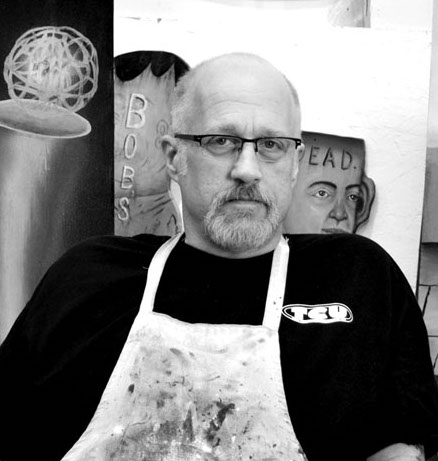 UW–Madison’s Fred Stonehouse, a professor in the School of Education’s Art Department, was featured in a Tone Madison article about his new album, “Fred Stonehouse: Accident Prone.”

Stonehouse, the article says, is known for his “surrealist, mystical visual work that seems to pull dreamlike imagination into a framework of American and religious folklore.”

Painting is a form of storytelling for him, the article adds, and Stonehouse says that “if a story is worth telling it’s worth embellishing.”

While Stonehouse describes his stories as “mostly pretty visual,” he recently joined several local musicians to record an album of his written stories. The stories all have something in common: “Either there are literal accidents or there is an accidental nature to how the story unfolds,” the article explains.

Stonehouse says that he “was very accident prone as a kid,” and shares how growing up in a Milwaukee neighborhood wrought with socio-economic and racial tension led him to get “mixed up in a lot of silliness,” inspiring his work now.