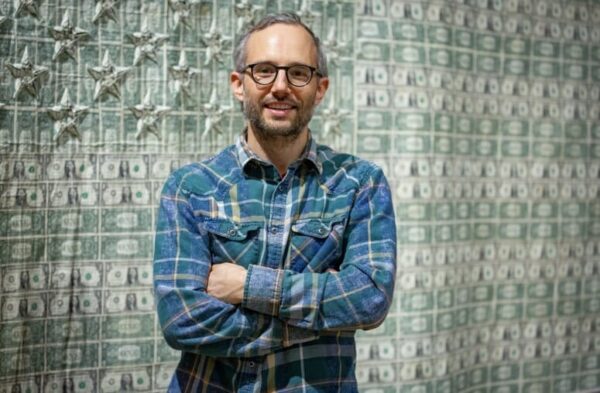 At the start of the pandemic, Keith Kaziak found an unusual inspiration for a new sculpture.

The UW–Madison art graduate student and sculptor had to clear out of his studio in March 2020 and work from his spare bedroom.

“We were ordering a lot of orders through Amazon, and I began collecting those boxes and cataloging them,” he said. “I started doing small mock-ups at home and that’s how it evolved.”

“All of the pieces were separate [and] I glued them together so they were all connected on the inside,” Kaziak said, “essentially all I needed was an eight-foot ladder to assemble this piece.”

For his work, Kaziak was awarded the International Sculpture Center’s 2021 Outstanding Student Achievement in Contemporary Sculpture Award, one of only 11 winners nationwide.

Kaziak, who is pursuing an MFA degree, is a sculptor and educator; he’s been the UW–Madison Interdisciplinary Artist Research Cohort Fellow for three years.

Kaziak wanted “Tower of Boxes” to be relatable.

“My choice of materials were common, ubiquitous, sort of vernacular construction-based materials things that most people can relate to,” he said.

He noted the ways in which the pandemic both inspired and influenced his work.

“I started thinking about how walls were isolating us during this time,” Kaziak said, “I was seeing the wall as also being isolated, so normally the galleries would be open and people would be walking around and looking at art. People can kind of relate to some of those notions.”

Read more at the UW-Madison News