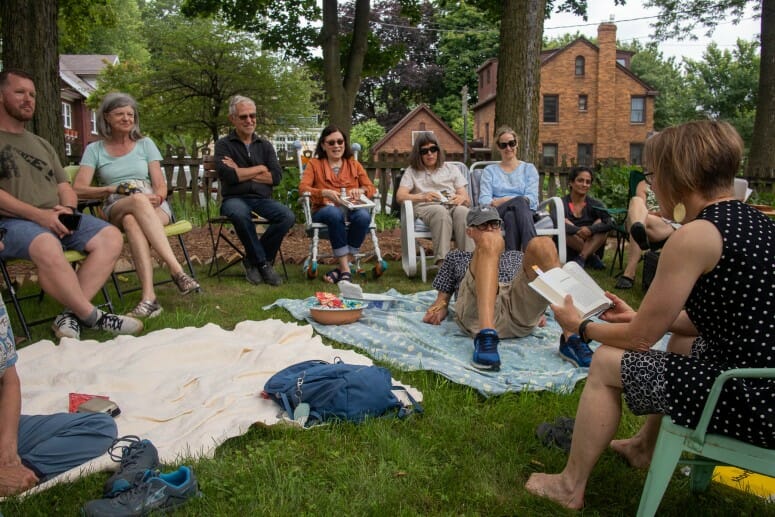 In spring, it was clear to UW–Madison art professors and artists Laurie Beth Clark and Michael Peterson that come summer, life still wouldn’t be back to “normal.”

Clark and Peterson co-founded Spatula&Barcode in 2008, a collaboration that weaves together artists, food, and community. Prior to the pandemic, the projects took place in Madison, as well as international locations in Canada, Australia, and Morocco.

With the pandemic abating but not entirely over this summer, they had to find a creative way to bring this art to people.

So they came up with a project called Home Stretch, where people sign up to go to artist’s personal performances. The model reflects on the importance of human connection at this time.

“It was that kind of feeling that people had to relearn how to be together or reinvent how to be together,” Peterson said. “We wanted to invite artists to make experiences for the public that would be about… the pleasure of being together.”

Clark and Peterson had previously done a project called Café Allongé, which was a project of small one-to-one performances that took place in coffee shops throughout Madison.

Based on that, Clark and Peterson developed Home Stretch.

“We first talked to some people we considered good advisors [and] everyone was super enthusiastic about the idea,” Peterson said, “we sent out about 50 invitations to different artists we knew… and then we asked those people to recommend people, and that’s how the list got built.”

Home Stretch runs from the summer solstice to the fall equinox and features interactive art experiences and performances from local artists. “And this is our favorite thing… talking to artists about what they’re making and helping them figure out how to make it in different contexts,” Peterson said. “It’s been so rewarding.”

Read more at the UW-Madison News