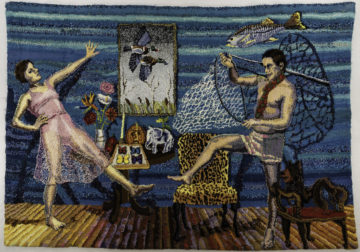 MILWAUKEE — The Portrait Society Gallery of Contemporary Art and The Warehouse are exhibiting fiber art tapestries by artist Shari Urquhart.

The Racine native grew up in Kenosha and graduated from Bradford High School in 1958 before earning her bachelor’s and master’s degrees at the University of Wisconsin in Madison [MA ’66].

She taught art from 1962 to 1964 at Horlick High School in Racine and then spent the bulk of her career in New York City.

She started as a painter and then began working with textiles while still in Madison.

She continued her own studio practice throughout her working career in New York, and reworked portraits of Medici princesses, princes, goddesses and northern Renaissance altar pieces using hooked fiber.

Throughout her career, she had many solo and group exhibitions with prestigious galleries around the country; her large-scale fiber tapestries feature layers of texture and eye-popping color.
In 2007, she returned to Kenosha, where she continued to create new pieces on a smaller scale. She continued her work until her death in November of 2020.

In Milwaukee, the exhibits feature 40 years of her tapestries, with more than 30 of her pieces being shown together for the first time.