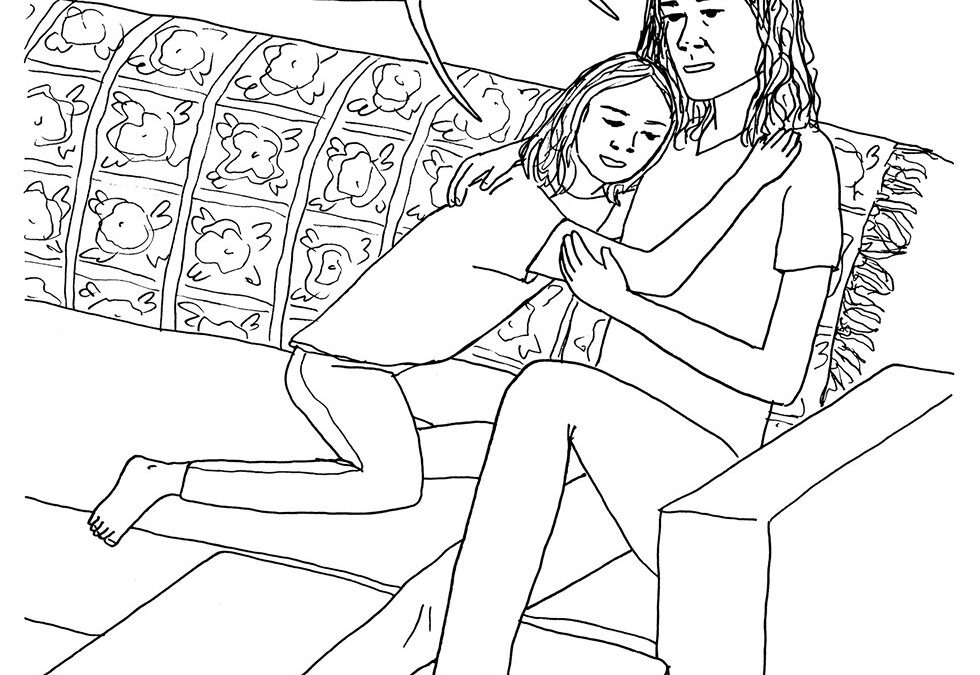 Keiler Roberts sits in front of her laundry machine, crying. It’s not the first time she’s cried on the floor, and when her daughter finds her, she recognizes an emergency situation. “Oh no, Mommy! 9-1-1!” Xia shouts as she rushes to her mother’s lap, absorbing the tears with her blankie.

This is one of the many illustrations of domestic melancholy and tenderness in Roberts’s My Begging Chart, a new collection of autobiographical comics from Drawn & Quarterly. Roberts is blunt about the highs and lows of everyday life, imbuing moments of vulnerability with dry humor thanks to her sparse art style and understated storytelling.

Raised in rural Sun Prairie, Wisconsin, Roberts didn’t have much access to the art world as a child, but a preschool visit to her teacher’s brother’s art studio instilled an early fascination with painting. “Growing up, there was no model of a professional artist,” says Roberts. “It was just art teachers, so I figured I would be a high school art teacher.”

Roberts pursued education at University of Wisconsin in Madison before switching to a BFA [’00] that allowed her to devote more time to painting. She continued down that path with a master’s degree from Northwestern University, and the Evanston-based artist has been teaching ever since, currently at the School of the Art Institute in Chicago.

“Keiler has always nurtured a humble balance between curiosity and aspiration,” says Michelle Grabner, one of Roberts’s former professors at UWM and her current colleague at SAIC. “What made her one of my favorite undergraduates are the same qualities that make her an inspiring and effective teacher in the classroom now.”

In 2009, Roberts took a comics course at DePaul University taught by cartoonist Aaron Renier, who was intimidated to have another professor as a student. “She was fully formed,” says Renier. “Part of me thinks she didn’t even need to take my class. She used the class as an excuse to start.” Roberts created the first issue of her self-published comic, Powdered Milk, at DePaul.

When it came to developing her aesthetic as a cartoonist, Roberts quickly realized she was most comfortable with the basics: black-and-white comics drawn with Micron pen on Bristol board. “There’s nothing luxurious or sensual about my drawing style or materials,” says Roberts. “What is the most direct way to draw something if you’re just trying to describe it clearly and fast? I’m not thinking about how to make this more beautiful or look more like ‘art.’”

Roberts met Annie Koyama of Koyama Press at the first Chicago Alternative Comics Expo (CAKE) in 2012, and while Roberts didn’t have much work to display, her mini-comics made an impression on the Toronto-based small-press publisher.

Read more at the Chigaco Reader