UW–Madison’s Rubin creates last print in Humanities, before building is closed for repairs 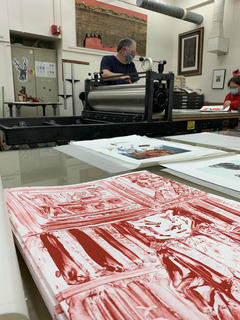 On April 30, a portion of the UW–Madison Humanities Building — which houses half of the School of Education’s Art Department — had to be closed for repairs due to structural damage.

Andy Rubin, a lecturer in lithography, finished one last lithographic print — “of our beloved Bucky Badger, posing as a 19th century intellectual,” he explained — before the equipment had to be moved out of the building to a temporary space.

The print will be used as a fold-over cover for the print sets that Rubin’s lithography students have created this semester.

Rubin described further: “Behind (Bucky) is a bookshelf with each student named on the spine of their own book/volume/tome. At the top of the image are two framed prints: a famous self-portrait of Alois Senefelder (the inventor of lithography), and an image of an early printer at a wooden press, inking a litho stone.”