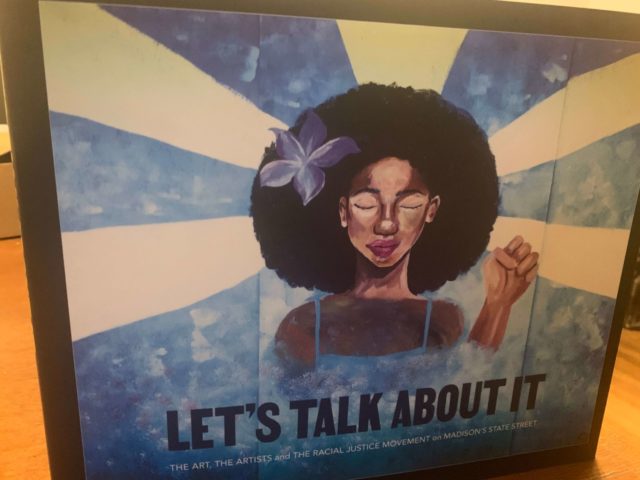 The American Family Insurance Institute for Corporate and Social Impact, in partnership with the city of Madison Arts Commission, has created a substantial book titled “Let’s Talk About It,” a compilation of the many city-commissioned murals painted along State Street during and after the Black Lives Matter protests over the summer of 2020. The book is available free and a copy can be requested by filling out an online form.

“Let’s Talk About It” features over a hundred murals painted along State street in the wake of several protests after the murder of George Floyd, some of which left many businesses along State Street with broken windows and property damage.

Photos for the book were taken by several local photographers including Amadou Kromah and Hedi LaMarr Rudd.

“[American Family Insurance’s] book is really significant because it’s a permanent record of an ephemeral project,” said Karin Wolf, Arts Program Coordinator for the city of Madison and one of the many city officials key in the mural commissioning process.

Nyra Jordan, Social Impact Investment Director at the institute and project director for the book, noted that “Let’s Talk About It” is a “powerful and historical record” of the protests and unrest of last summer.

“I think [the book gives] the community a glimpse, especially those that may not be from Madison, or who are not here, but most definitely those that were here and lived it, it gives them just kind of a glimpse into what was happening last year and it really is a historic preservation of the art, and honestly it’s to recognize the artists,” Jordan said.