A Respite From The Waking Nightmare: A Review of Western Exhibitions Drawing Biennial by Erin Toale 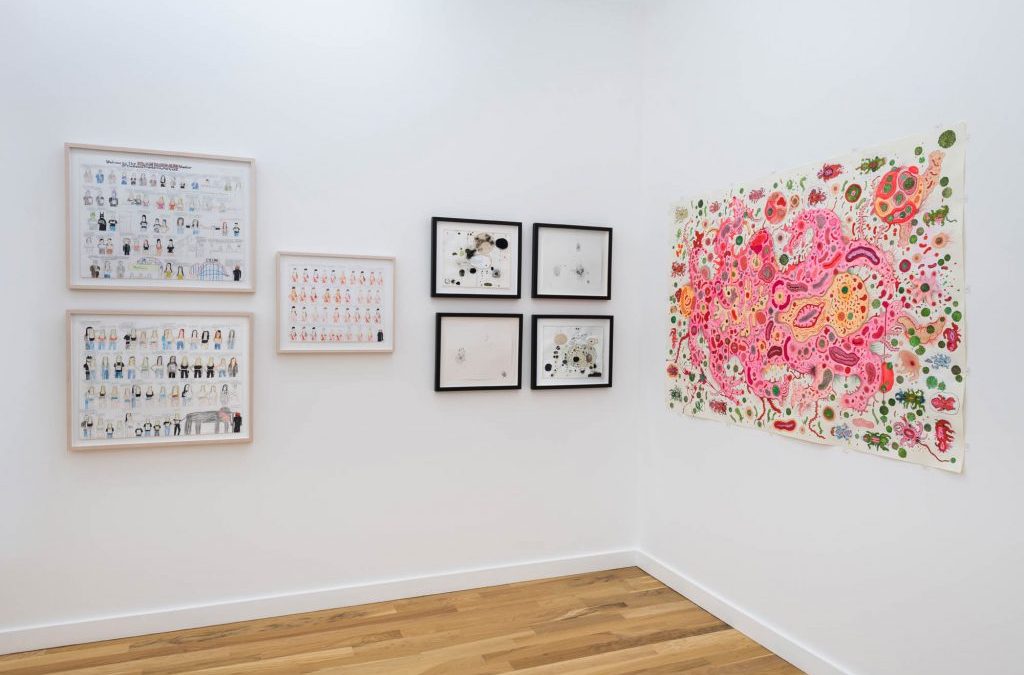 I haven’t publicly written about art for over a year. A year called incoherent, unresolved, discontinuous, and disconsonant in this very publication by Alan Pocaro, a great writer. I, a mediocre and melodramatic writer, prefer the term waking nightmare. I don’t know how to write about art—especially art that a lot of readers can’t see in person—during a waking nightmare. So I have avoided it all together, until now. How did I go about returning? I decided to start somewhere familiar. I wrote about Western Exhibition’s tenth anniversary in 2014. It was one of my first Newcity bylines; and now I return for the first ever Western Exhibitions Drawing Biennial.

Drawing. A medium that is foundational, yet often relegated to the planning stages: just a sketch, rarely the main event or finished product, something unearthed after the death of an artist or architect to demonstrate their rendering acuity. This biennial, however, is not drawing as a first draft, a prompt or the beginning of something. This is the gallery declaring its commitment to drawing in a public ceremony. This is the evolving mission and history of the space as told through multiple panoramic storyboards, each artist with a vignette contributing to the overall narrative. (It’s unsurprising that a gallery with an emphasis on comics and artist publications would treat the walls like a deconstructed book.) Nor is what is presented in this survey Drawing with a Capital D. Drawing in this context is not limited to pencils or even to two dimensions. The bevy of materials represented includes shoes (Erin Washington), video (Lilli Carré) and—my personal favorite—stiffened, crinkly flour bags as a rendering surface (Julia Schmitt Healy). There are nice splashes of color in the largely black-and-white collection. Clocking in at twenty-seven artists, 116 works and a thirteen-page checklist, is it busy? Sure, but uncrowded. Anyway, who cares! You are alone in the gallery, if you get to go. I felt lucky and rued the day I derided shows for being overhung.

A massive work by a gallery founding artist, Stan Shellabarger [MFA ’96], is the centerpiece of the main room. It shows you how to walk around the gallery: slowly, ponderously, taking multiple and intentional laps. Gallery director Scott Speh [MFA ’97] says: “I’ve been endlessly fascinated with how Stan Shellabarger ‘draws’ since first encountering his work when we were both in grad school at UW-Madison in the nineties. I learned that he makes marks through endurance-performance actions, like in this show, by walking on paper laid over an aggressive surface while wearing shoes with graphite-impregnated soles.” This reminiscent anecdote reveals that Speh, too, has returned to the familiar during this strange period. Perhaps he is also feeling nostalgic for simpler times.