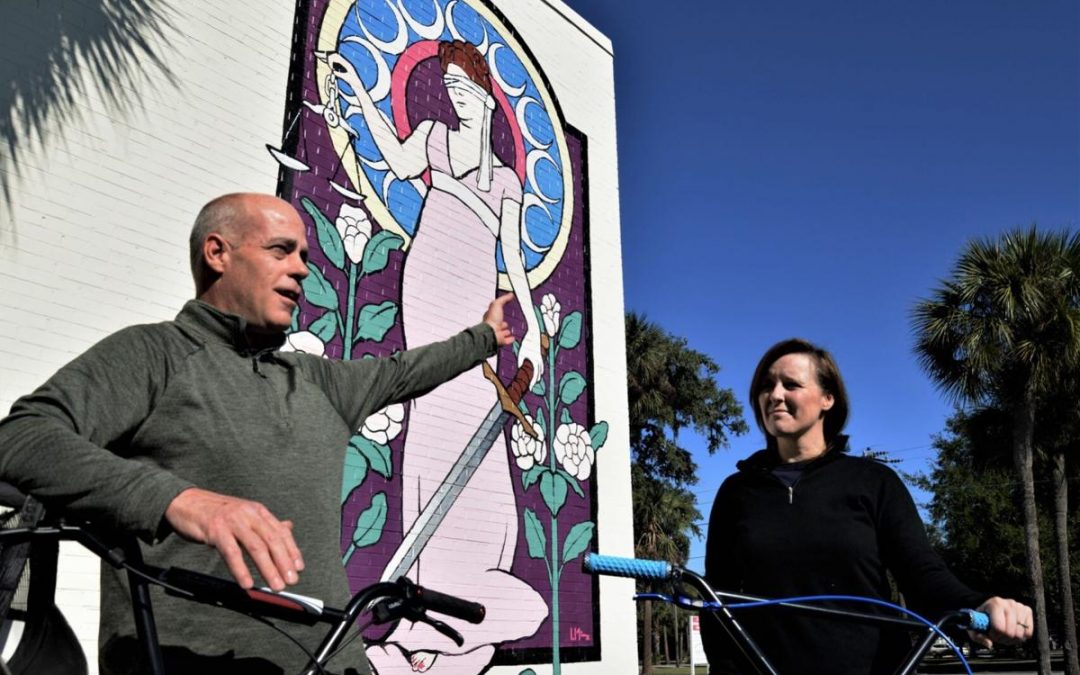 Out of the murals in downtown Brunswick, numbering close to a dozen now, Lady Justice is the standout favorite of local bikers Meghan and Robert McDonald.

A painter herself, Meghan McDonald said the piece by Jeff LeMieux [MFA ’01] instilled a feeling of security in that, to her, it represented the ideal of blind and impartial justice.

They plan to show off the results of the Brunswick Mural Project to anyone who shows up to a group bike ride around town on Jan. 17.

They picked the downtown murals as their stops for a few reasons, Robert said. Riders will have to climb few hills in Brunswick and the murals are close enough together that stops are frequent, making the circuit accessible to children and older cyclers.

Beyond that, he said it’s a great way to show off the downtown area and draw attention to the hard work put in by artists, city officials and business owners to beautify his hometown.

“I think it’s going to be pretty significant,” Robert McDonald said. “It’s a good little ride, it only takes about an hour, an hour and a half. It’s good for beginners, it’s not fast-paced. It’s on alleyways and side streets, with history and cobbles. It’s a good ride.”

Information on each mural is available on the Brunswick Mural Project section of Glynn Visual Arts’ website, and Meghan said she knows enough about most to discuss them with fellow riders. Each mural is also a potential photo op, she added.

The roughly two-mile ride will start at 1:30 p.m. on Jan. 17 in Mary Ross Waterfront Park and end at the same place.

Read more at The Brunswick News