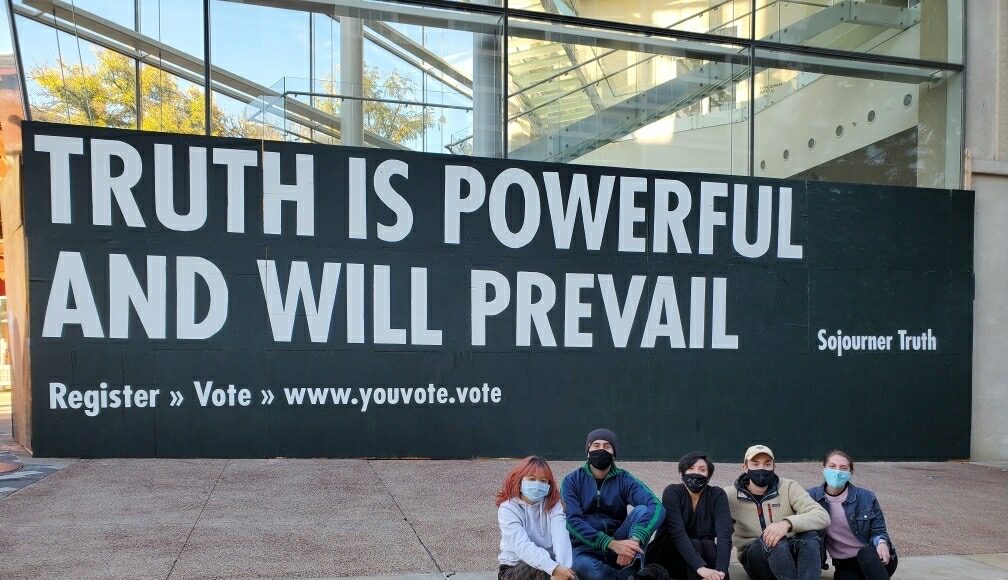 Madison Museum of Contemporary Art (MMoCA) and the University of Wisconsin-Madison campus are among dozens of fixed and mobile sites nationwide that will be hosting a series of election-year themed artworks envisioned by Jenny Holzer, a New York-based artist for the YOUVOTE campaign.

“We are honored to work with Madison Arts Commission and the Art Department and First Wave Scholars Program at UW-Madison, and for MMoCA to serve as a site for Jenny Holzer’s YOUVOTE project,” said Christina Brungardt, the Gabriele Haberland Director of MMoCA, in a statement. “From her early Truisms featured in New York City’s Times Square to present, Holzer has activated public spaces to create meaningful dialogue with communities about pressing social issues and personal responsibilities.”

In anticipation of the 2020 U.S. presidential and congressional elections, Jenny Holzer Studio is mobilizing a series of artworks in key areas through the swing states of Wisconsin, Michigan, North Carolina, and Pennsylvania that will champion broad political engagement, issue awareness, and voter empowerment. For more than 40 years, Jenny Holzer has presented her astringent ideas, arguments, and sorrows in public places and international exhibitions, including 7 World Trade Center, the Venice Biennale, the Guggenheim Museums in New York and Bilbao, the Whitney Museum of American Art, and the Louvre Abu Dhabi.

The Madison component of the project is a joint effort between MMoCA, the Madison Arts Commission, the University of Wisconsin-Madison Art Department, Office of Multicultural Arts Initiatives-First Wave Scholars and the campus chapter of the American Institute of Graphic Arts (AIGA). Also collaborating are Frank Productions, whose theaters The Sylvee, The Orpheum, and The Majestic, will be used as polling locations, and The Barrymore, which will host YOUVOTE messages on its marquee.