Art in the age of Trump: Q&A with Diego Rios by Alexis Terrazas 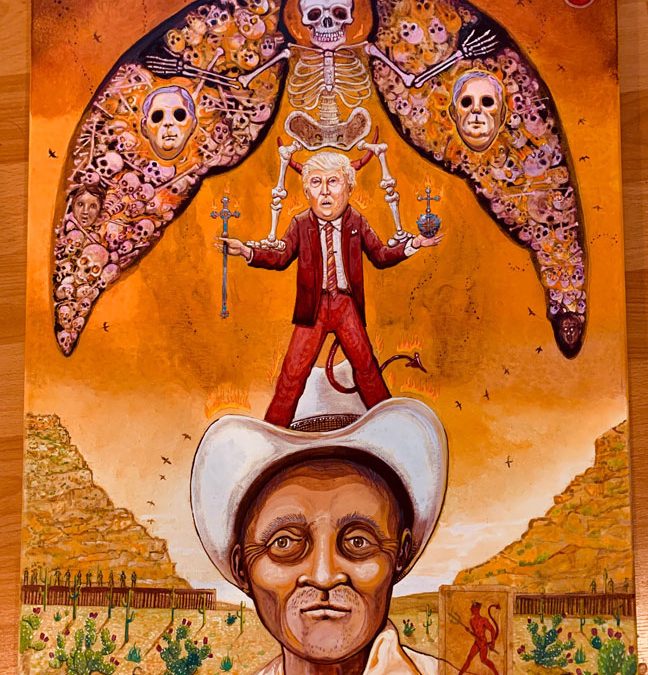 The son of undocumented Mexican farmworkers, Diego Marcial Rios [MFA ’89] is a Chicano artist with more than 30 years of practicing his craft. Born in Fresno, California, Rios began illustrating when he was just 10 years old. He went on to earn his MA in Fine Art from the University of Wisconsin at Madison, and now teaches art classes at the Mission Cultural Center for Latino Arts. His latest political work, the “Trumpesito Set,” is a series of acrylic on canvas paintings done out of his studio in Fremont, all taking aim at the president. On Sept. 14, Rios spoke with El Tecolote about his latest work, his heritage, and politics.

Where did this deep passion of expressing yourself via art come from?

When I was three or four years old, my family lived in Guadalajara, Mexico. My father took me to go see the murals of José Clemente Orozco in Guadalajara. And he took me to go see a particular mural called “El hombre de Fuego.” He lifted me up to see that mural, and believe it or not, at that moment I knew what I had to do with my life. It hit me like a diamond bullet. Bam. I wanted to become a visual artist, and I wanted to pursue justice in the type of work that I did—for my people and for all people.

Your latest art takes direct aim at the President, what sparked that?

I’ve always produced political artwork, for about 30 years. I’ve never in my life ever hit a specific president, because I always thought that was a waste of your time. But this particular guy, Donald Trump, he’s a racist and he’s a fascist. I’ve never seen such a racist, fascist individual in power in anything, let alone a president of the United States. And not only that, he attacks our people—Latinos. He attacks us specifically, Look at what he does to the immigrants located at the border, look at how he treats the children of immigrants, look at how he talks about our people…this guy is carte blanche above and beyond what I’ve ever seen. The only thing I have in terms of comparing him is probably Mussolini or Hitler. Even those two guys were a little more intelligent than this guy that we’ve got right now.