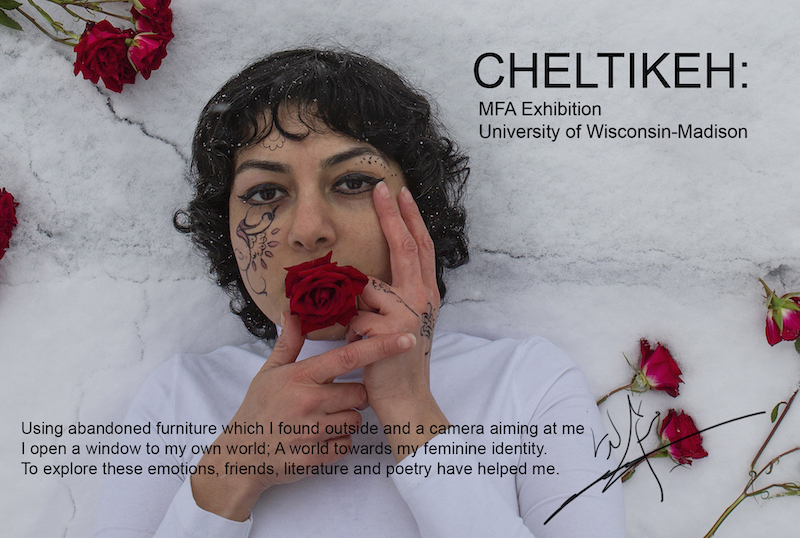 Maryam Ladoni, a photo-based artist who grew up in Iran and came to UW–Madison to pursue a master of fine arts, was looking forward to opening her MFA exhibition to the public March 23-26.

But on March 11, due to growing public health concerns over COVID-19, the university announced that when spring break was over, there would be no face-to-face classes through at least April 10. On March 13, Ladoni says she was still rushing to her framer and planning for some sort of in-person exhibition, even if that meant limiting the number of people who could attend.

“It was sad, but I was still emotionally solid,” Ladoni says of that time.

The situation quickly worsened, however, and within days it became clear that any sort of in-person MFA show would not be possible due to the pandemic.

Ladoni was told she had to grab essential materials from her campus MFA studio and move everything out within 48 hours. “It was a very quick change and now I was sitting in my tiny room, looking at this mess. It was so shocking.”

But she didn’t quit.

Instead, Ladoni refocused and worked hard to get her MFA show posted online in early April. And on April 8, she shared a powerful video she produced that showcases her journey to UW–Madison and the staged photography work that led to her MFA exhibition, “Cheltikeh.”

Read at the UW-Madison School of Education News