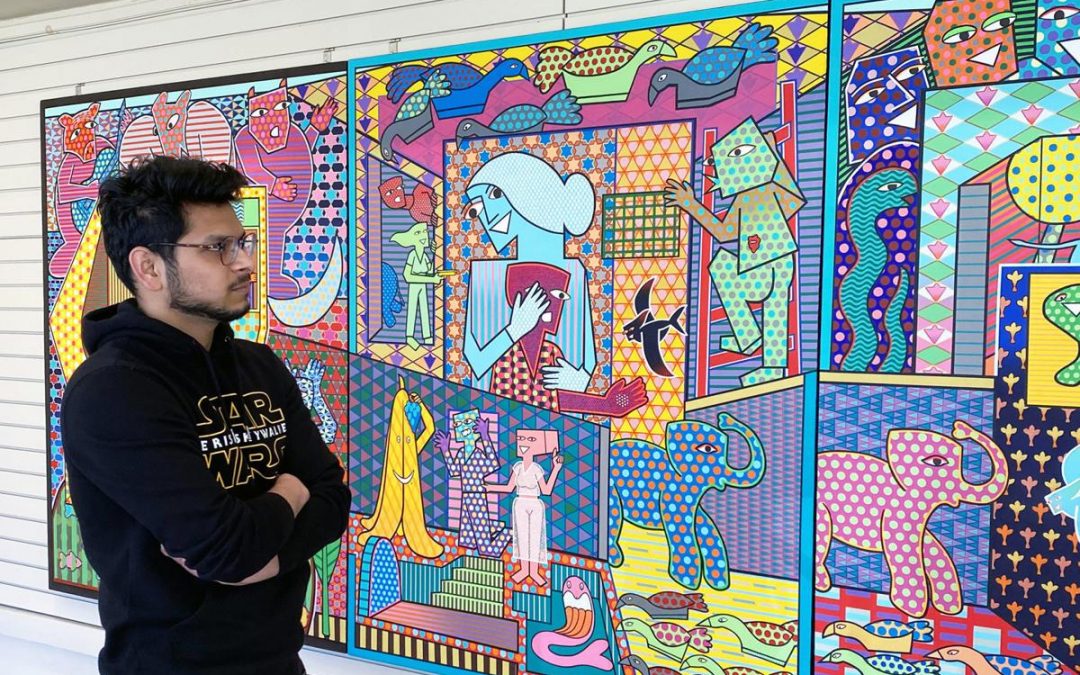 Pranav Sood’s strongest opinion in life is also the title of his new art exhibit at the Al. Ringling Theatre in Baraboo: “Life is About Love and Love is Complicated.”

The 24-year-old Madison resident and native of India is showcasing his art in the gallery through March 26, including his signature piece that’s 12 feet wide and 5 feet tall.

“It’s the biggest painting I have ever made,” Sood said of the piece that tells a love story in three panels, from left to right.

Sood, in the process of attaining his master’s degree in painting at the University of Wisconsin-Madison, spent 12 to 14 hours every day for three months to complete the painting in February.

It starts with a honeymoon phase when a person feels like everything is good: “You start dating and everything is music,” Sood said. “It’s like heaven or like you are on drugs.”

The second panel explores how someone tries desperately to understand another person’s viewpoint, which is never easy, Sood said. His own love story started seven years ago when he met his girlfriend during high school in Ludhiana, which is a city with almost 2 million people in the state of Punjab in northern India.

Some of their own challenges relate to culture: lovers in India are not supposed to show affection for each other in public. Some relationships, including theirs, are kept secret from families if a husband is not yet wealthy enough to provide for his wife.

“The whole story in my paintings is inspired from my real life love story including the problems I could see and the ways I tried to solve them,” Sood said. “We’re in a long-distance relationship and so there’s missed communication and we fight and all those things. I think about the things I do and don’t do because we each have our own perspective and I try to understand hers.

“I believe everyone does what they feel is right.”

His third panel is about two lovers coming back together after a fight.

“It’s when we realize we love each other and we solve things together,” Sood said. “Every day they fear they will lose the ones they love because of their fights, but in reality, if you really love someone, I believe you never actually lose them.”

Sood’s paintings employ “intense geometrical patterns” and floral patterns using all of the different colors to create “an optical illusion,” he explained. His work is both narrative and abstract.

Read at the Baraboo News Republic