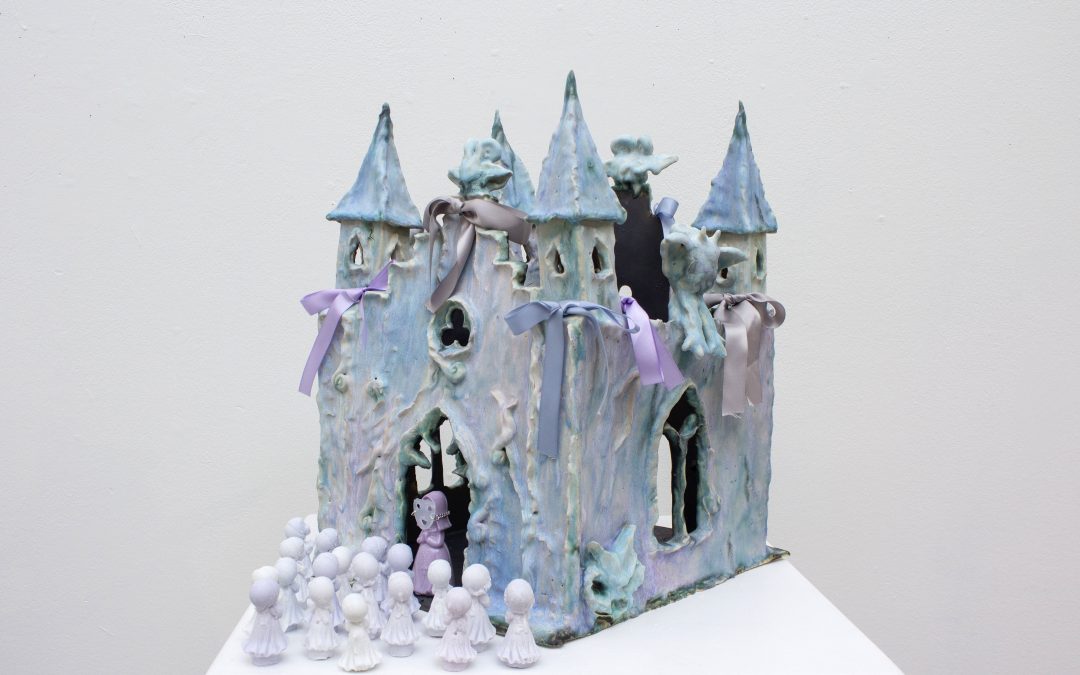 With the nineties making what seems like a never-ending comeback to visual culture, it is easy to forget about the anxieties that rose in the turn of the millennium. [MFA Candidate] Emma Pryde’s work lies somewhere between the excitement and the undercurrent of fear in child ephemera of the time. As she put it in an interview with Gabrielle Jensen last year, “I just had such a bizarre feeling about life when I was a kid. A lot of the work is engaging with that sickness”.

Pryde constructs scenes out of an ongoing repertoire of characters, symbols and ornaments, all sharing a similar saccharine quality and cloying colour palette. She explains: “My work is very driven by found content—imagery, objects and symbols that already exist in the world, that feel dualistic in a sense. I am drawn to things that are beautiful or cute but at the same time sad or damaged.” Masks from Greek tragedy, dolls, candles and bows are pieced together in the endlessly appealing jigsaw puzzle of her laser-cut works.

Ceramic creatures that resemble Pokémon characters moulded from memory take their places on the floor, looking up at you with cartoon eyes and sticking out their tongues. Sculpted in slip-cast porcelain and coated in a holographic glaze, they offer a more hand-made companion to her slicker wall-based works. The clay is reminiscent of dough, or a kid’s birthday cake that’s been iced while slightly too hot.

Her ceramics also take on architectural forms, as her triptychs appear like stained glass windows or church altars, drawing a parallel between consumer culture and religion. Mixed with the more domestic dollhouses and birdcages, she conjures up the foundations of an alternative world—or as someone on Instagram commented—a “twin planet”.