Change in many forms, is often difficult; not gradual evolutionary change, but rather hard-edged, instantaneous change. History is comforting even if it is built on quicksand; I lean on art historical knowledge embodied through personal experience, as it is a constant, inscribed in memory even as it is forever being replaced and re-learned. However, I am an eager audience of new work and new ways of understanding the world through the objects and gestures that artists make, how they circulate across cultures, and how they impact the students I teach and learn from.

Bias is baked into history, and personal bias (sometimes described as “taste” or “esthetics”) is equally a part of personal history. I am wired to be fond of 20th century Jewish artists with names like Lipshitz, Gottlieb, Rothko, and Chagall because those are the artists my father loved. He loved them because they proved to him that a first or second-generation diasporic Jew could find some success in the field that he wanted to be a part of after the war and after attending art school on the GI Bill. In other words, such possibilities reinforced his own aspirational desire grown from a similar set of circumstances. That was his story and, by extension, it became the foundation for how I began to understand or build my story. As time went on, I wrote my own story, one that is perhaps more discursive than my father’s. I went on to teach in a university where I have had the chance to weave a narrative of influences that represent both my own history and also the circumstances of my generation, of my opportunities, of first-hand witnessing of the work of artists of my peers, and of my own contributions to a theory of inclusiveness and interdisciplinarity.

However, I often realize, in the midst of a class or lecture, that my history, or the curriculum that I happen to be teaching at any given moment, is not necessarily a body of knowledge that resonates with the students I am teaching. So rapidly has the evolution of visual culture become a sprint toward the new that, in the way that the avant-garde of the 20th century was overtaken by history, so too are we experiencing a similar phenomenon. It is a kind of Futurist aspiration come to life; the shock of the new is a never-ending tidal wave of optical stimulation. Such a prolonged and energetic period of change does not allow for one to spend the requisite time to find a context for the new, and, at least in my experience, creates a sense of anxiety around the possibility that I might never fully grasp the moment before it has come and gone.

Teaching in the arts necessarily evolves; ideas change, techniques change, communities of practice become more open and porous. But what resonates with me or writers of art historical texts may not resonate with the intended audience, with the very students we are training to be critical thinkers in the 21st century. 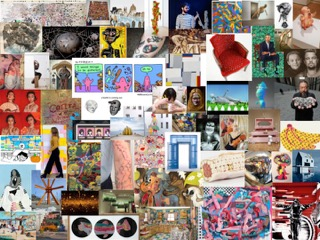 I recently asked my students to tell me what inspires them, what they are looking at and what matters to them. I asked them to take five minutes out of class time and, using their phones, to send me images of works of art or culture that they wanted me to know about; things that we had not talked about in class but that served as illustration to some of the bigger ideas we had covered. I took the hundred-plus images and combined them into one densely populated slide. Taken as a whole, what the students sent in response to my prompt is generally new to me. They indeed showed me new work in a range of media that I would otherwise not have been able to discuss with them. The vibrancy of ideas and range of artists that made the images they shared with me is firmly situated in the current historical moment. As a result of this prompt, I am all the more educated myself, thanks to the generosity of my students, and will be a better teacher for it.