‘Flow: The Art of Felipe and Carlos Eduardo Gacharná’ on display at Academic Staff Art Gallery 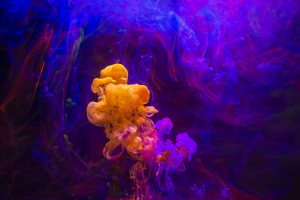 The work of the School of Education’s Felipe Gacharná and his brother, Carlos Eduardo Gacharná, is being showcased in the Academic Staff Art Gallery in Bascom Hall.

Their photography series is titled, “Flow: The Art of Felipe and Carlos Eduardo Gacharná.” An opening reception is scheduled for Monday, Oct. 14, from 2:45 to 3:30 p.m. The Academic Staff Art Gallery is housed in room 270 of Bascom Hall. The exhibit runs until January 2020.

Describing the exhibit, Felipe explains that artists and scientists now share similar positions on the edge of human understanding.

“While scientists aim to enlighten by deciphering quantitative data, artists delve into the ephemera of the human conscience in the hopes of inspiring others,” says Felipe. “But what if enlightenment and inspiration share more than it appears?”

The Gacharná brothers, who were born in Colombia and are both UW-Madison alumni, explore this very question through their photography. They use high-powered black lights and special fluorescent dyes in an effort to capture the material nature of energy itself.