“Yes, the professor is a monkey” by Scott Gordon 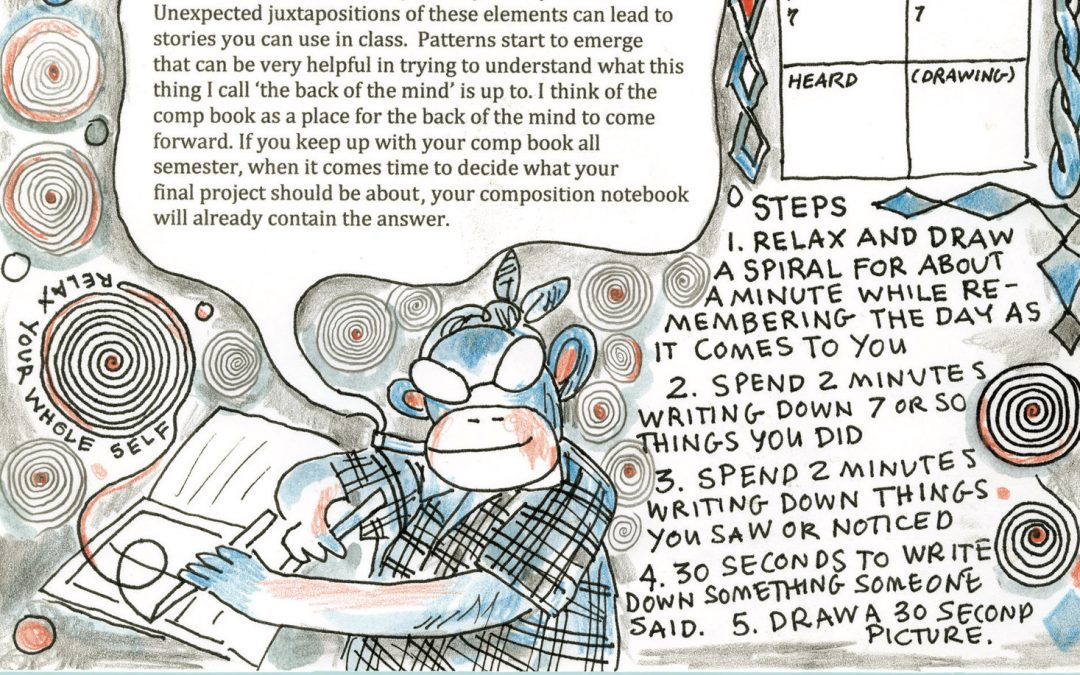 The only Lynda Barry story I have to offer is really just a Lynda Barry sighting, but it still makes me really happy. A few years ago I was in the Wisconsin Institutes for Discovery building on campus for a work meeting, when I saw Barry pushing around a big handcart with a sculpture on it. I’m pretty sure the sculpture was some kind of big monster-head thing, but that could be my memory filling things in. I can’t seem to find a photo of that specific art piece anywhere, but it was part of Barry’s “Stealth Sculpture Project.”

As Barry, the renowned comics artist, defined her singular role in the academic world at UW-Madison, she placed an assortment of large sculptures around the building. Her stated goal was to surprise the variety of scholars who rush around the WID building doing #interdisciplinary things all day, shaking them out of their concentration and forcing them to reckon with their everyday surroundings in a new way. Actually physically carting these ungainly, wonderful pieces of art around the building, Barry was opening up the world of artists in a frank, welcoming way that I just wasn’t used to experiencing. Not only that, Barry’s world was knocking over into other people’s worlds, re-ordering our perceptions whether we asked for it or not. If there’s a nice or playful way to snap your fingers right in someone’s face, this would be the artistic equivalent.

Barry’s status as a newly minted MacArthur fellow has prompted a good few people to take stock of her contributions to the larger world of art and comics and to the Madison and/or campus communities. It also made me really wish I’d read more than a couple of her books and an assortment of comics I’ve encountered over the years in free newspapers and comics anthologies. There’s a big place in my heart for her 2014 book Syllabus: Notes From An Accidental Professor, an in-depth look at how Barry designed her classes at UW. In the format of an oversaturated Composition notebook, Syllabus takes a both instructive and deeply self-referential approach, incorporating students’ work into its welcoming flow and often depicting Barry herself with annotations like “Yes, the professor is a monkey (later she becomes an old skull).” The advice that stuck with me the most from Syllabus is this: When you’re creating or taking in a work of art, it’s crucial to try and ignore whether or not you like it. “Liking and not liking can make us blind to what’s there,” Barry writes. It underscores how hard it is to untangle our relationship with art from emotion and subjectivity and all sorts of unconscious reactions. Those things are all important, but pushing back against them, to the extent I can, has often helped me push through a piece of writing or get my head around a piece of music.