Lynda Barry Explores the Language of Art by Heidi MacDonald 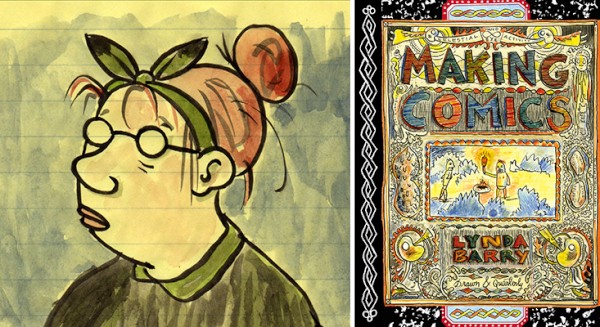 Making art is like a Ouija board for the subconscious, only without the supernatural. So says cartoonist and educator [Professor of Interdisciplinary Creativity] Lynda Barry, whose new book Making Comics, due in November from Drawn & Quarterly, offers readers methods for learning to tell stories in pictures while plunging deep into their memory banks to unlock creative connections.

Barry has had an amazingly varied career. Her weekly comic strip Ernie Pook’s Comeek was a staple of the alternative newspapers that flourished in the 1980s and early ’90s. Since then she’s written two acclaimed novels, made one into a play, and, in her latest incarnation, become an in-demand educator who helps people discover the creative language of art.

Making Comics is Barry’s latest collage of comics and instruction, drawn from the course that she teaches at the University of Wisconsin–Madison art department, where she’s an associate professor. In the book, exercises are interspersed with views on creativity and storytelling, with illustrations based on the simple but inspiring scrawls of her students. It’s both exhilarating and challenging as it asks students to draw themselves as Batman or make a comic about their life in a few hours.

Barry’s previous three books—Syllabus (2014), Picture This (2010), and What It Is (2008)—all explored various aspects of creativity, mixed with narratives and some of her best-known characters. Making Comics is more of an actual course, with instructions and a list of materials; but as in everything Barry creates, her language and art are studded with haunting allusions.