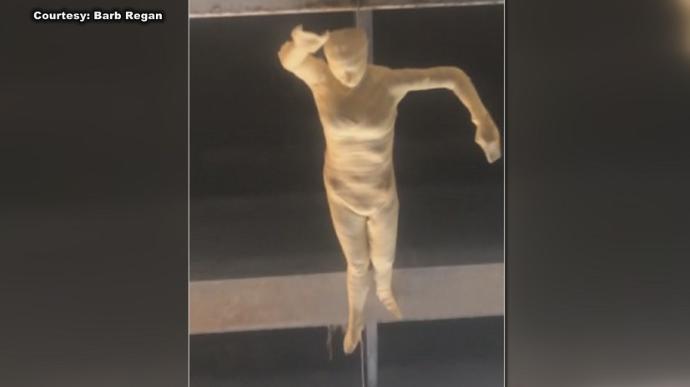 Madison, Wis (WMTV) — A ‘creepy’ art display under the John Nolan Bridge at Wingra Creek is getting a lot of attention on social media.

It’s the talk of the town.

“I heard some people talking about it and oh my gosh,” Martha White, Madison resident said.

It’s hard not to stop and stare.

Five figures are strung under the John Nolen Bridge and dangling over Wingra Creek.

A Middleton kayaker, Barb Regan, caught a glimpse of the human body castings from the water.

“They kind of look a lot like mummies,” Regan said. “I looked up, and I saw something from a distance and thought that’s kind of weird and creepy.”

Some people even thought it was a prank, but the man behind it all calls it art.

“I hear from many different sources saying ‘wow those are really cool and kind of creepy,’ but I don’t mind it at all,” Chris Murphy [BFA ’84], sculptor said.