Maker of things by Brian Rieselman 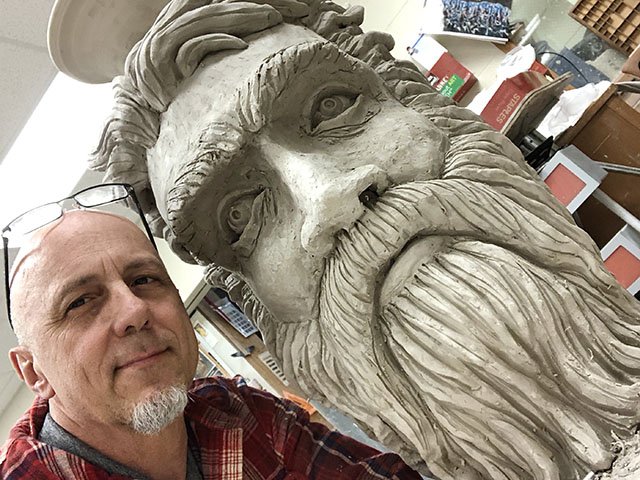 Ceramic sculptor, teacher, musician, builder and all-around mensch Phil Lyons [MFA ’07] is wrapping up one of the longest of his illustrious gigs as an artist — a “maker of things,” as he calls himself.

As the current semester approaches its end, Lyons will retire after 30 years of teaching ceramic arts in public schools, the last 17 at Madison West High.

A retrospective of his selected works is on exhibit in West’s Colucci Gallery through May 3. Forty percent of the receipts from work sold will benefit the West High Visual Arts Endowment Fund.

The easygoing Lyons was in a reflective mood as we settled in to talk at the gallery. He was fresh off recording an episode of The Potter’s Cast, Paul Blais’ influential podcast (Lyons appears on episode 514).

“I was lucky to have a very meaningful career teaching and being able to make art at the same time,” he says.

Lyons has a large as-yet untitled work in progress in the nearby workroom, slick red clay taking voluminous shape in an earthy tradition old (almost) as mud and as universally intimate as a soup bowl.