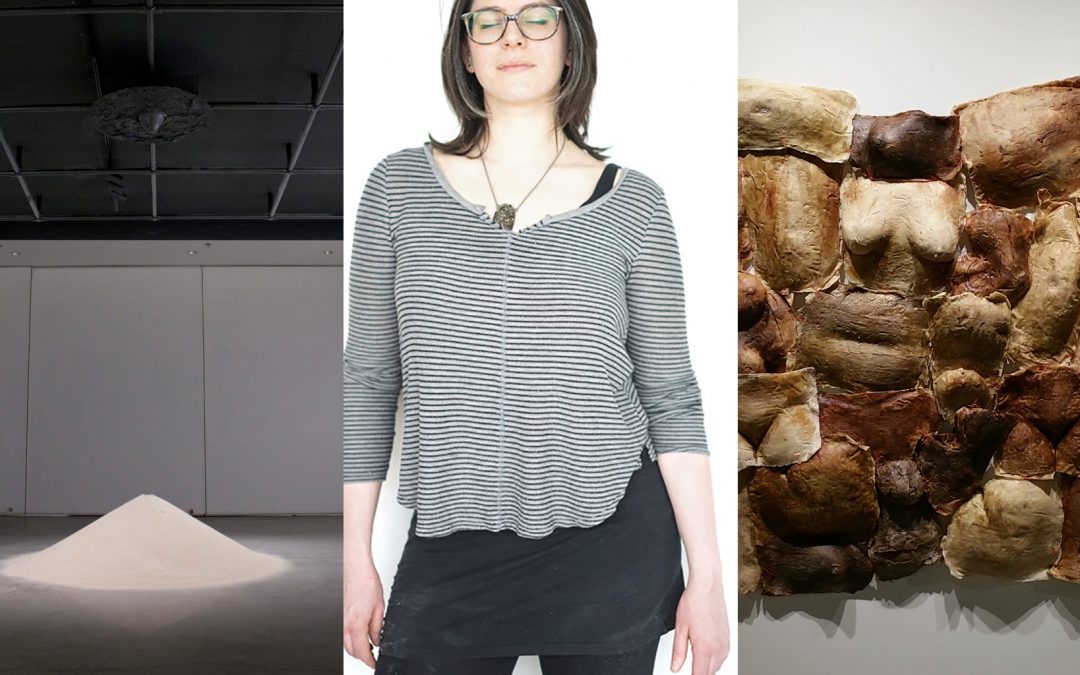 An MFA candidate in Glass, Anna Lehner‘s work explores aspects of geologic and human time scale through live data, glass, written word and soundscape. The fault lines and tremors in our continental surfaces tell the story of a foundation that is in constant motion and unrest. Presently, Lehner is interested in exploring the facets of fracture within tectonic plates and how they correlate to human chronology. The physical qualities of glass such as fragility, distortion and ice-like mimicry play into these concepts of timescale explored throughout her sculpture, installations, and 2-dimensional works.

Lehner received a BFA in 3D Fine Art and a BA in Art History from the University of Wisconsin-Stevens Point. Lehner has received multiple awards including a Project Assistant position within the Art Department and professional publications such as the New Glass Review magazine of the Corning Museum of Glass. She currently serves as a co-curator of the School of Education gallery and is a graduate associate to the Center for Culture, History and Environment within the Nelson Institute. annalehner.com

A body-positive, feminism-forward artist, and designer who is in love with found objects, 4D MFA candidate Kel Mur explores the female figure and how it has been commercialized, objectified, and celebrated with work steeped in feminist theory. Her body of work consists mainly of two processes: assemblage and photographic documentation.

Kel Mur grew up in New Jersey, graduated Cum Laude with a B.A. in Fine Art from Monmouth University in 2011, and received the Creativity in Studio Art Award for her senior honors thesis, Commodity. Since then she has relocated to New Orleans to develop her studio practice and has shown in female-centric shows like La Femme at the New Orleans Art Center, The Fairer Sex presented by Where Y’Art, and in other socially conscious exhibitions like Politico Pop-Up. She has also shown work in New York and along the Jersey Shore. Kel Mur has had artwork published in BARED, an anthology of writing and art about breasts (La Femmes Folles, 2017) and HOOT Online Magazine (2013). She also works as a freelance illustrator.

Kel Mur is a member of the Catalyst Collective of New Orleans, an art and social action initiative in New Orleans and frequently volunteers for Mama Maji, a New Orleans based non-profit that funds water projects and entrepreneurial training for women in Kenya. kelmur.com

Growing up on more than a few military bases, MFA candidate in Photography Kayla Story attempts to visually capture the complexity of individual perception in the process of constructing who we believe ourselves to be in photography, printmaking, and installation, which she felt consistently disconnected from as a child and young adult. She is fascinated with how this built image is based on and ultimately augmented by our experiences of people, places, and culture.

Her current body of work, Absent, aims to probe the emotional complexities of family life which are deeply influenced by absence, longing, and expectation. Drawing on conversations with adults that have grown up in full or in part with an absent father, as she did, Kayla uses photography and installation to translate shared experience. This research and resulting exhibitions have been supported by the Madison Arts Commission as well as by the Overture Center for the Arts.

Story is an MFA candidate at the University of Wisconsin – Madison working in photography, printmaking, and installation, and received a BFA in Photography from Columbia College Chicago where she was a presidential scholar and purchase award recipient. She was awarded three scholarships to summer workshops on the photographic portrait and storytelling at Anderson Ranch Arts Center in Colorado for 2015, 2017, and 2018. Her current stream of research and resulting body of work on the topic of fatherlessness has been supported by the Madison Arts Commission Grant as well as by the Overture Center for the Arts. Kayla’s work has also been reviewed and exhibited by Aint-Bad, Wally Douma Student Art Gallery (Minneapolis, MN), Indestructible Energy Zine (London, UK), Slideluck (Austin, TX), and Rum Magazine (Graz, Austria). She currently teaches Intro to Digital Technologies in the Foundations Program of the University of Wisconsin-Madison Art Department. kaylastory.com