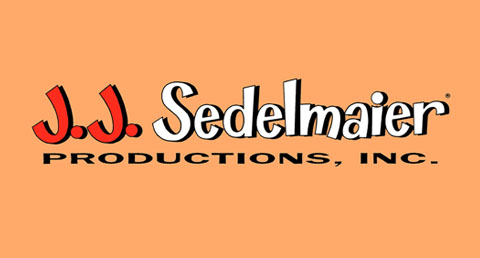 This logo appeared on a title card at the end of The Ambiguously Gay Duo. These sketches were part of the Saturday Night Live TV Funhouse collection. Sedelmaier and Robert Smigel created and produced the animated skits featuring vocal talent from Steve Carell and Stephen Colbert.

The Ambiguously Gay Duo is just one of the many feathers Sedelmaier has in his animation hat. Remember the first season of Beavis and Butt-Head? Sedelmaier launched that show for MTV. How about the pilot for Cartoon Network’s Harvey Birdman, Attorney at Law? Yep, that’s another Sedelmaier creation.

Other feathers include his wide array of advertising work for brands like Geico, Volkswagen, and the NBC Peacock itself. Each commercial includes own signature Sedelmaier animation style. There’s retro, where Volkswagen meets beloved 1960s cartoon Speed Racer. A simple linear approach utilized for Slim Jim during the 1990s. Playing up Speedy Alka Seltzer’s iconic character performance for Bayer. When it comes to beloved brand mascots, Sedelmaier knows how to hit refresh in all the right places.