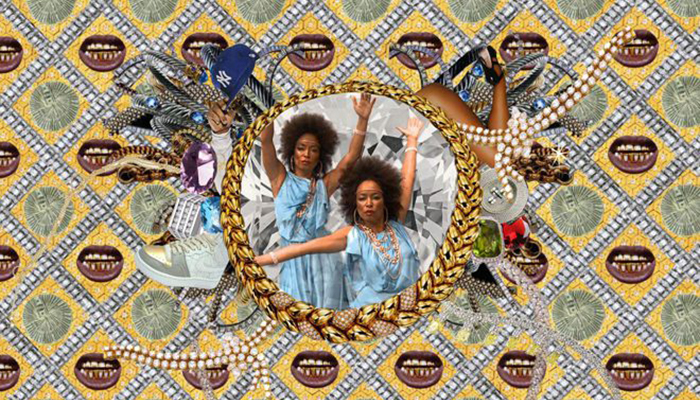 Rashaad Newsome is a multidisciplinary artist whose work blends several practices together including: collage, sculpture, video, music, computer programming and performance, to form an altogether new field. Best known for his visually stunning collages housed in custom frames, Newsomes’ work is deeply invested in how images used in media and popular culture communicate distorted notions of power. Using the equalizing force of sampling, he crafts compositions that surprise in their associative potential and walk the tightrope between intersectionality, social practice and abstraction. Newsomes’ works opposes cultural essentialisms. They lead us into a realm of uncertainty, in which the symbols presented transform, but are nonetheless made tangible.

Newsome lives and works in New York City. He was born in 1979 in New Orleans, Louisiana, where he received a BFA in Art History at Tulane University in 2001. In 2004, he received a certificate of study in Digital Post Production from Film/Video Arts Inc. (NYC). In 2005 he studied MAX/MSP Programming at Harvestworks Digital Media Art Center (NYC). He has exhibited and performed in galleries, museums, institutions, and festivals throughout the world including: The Studio Museum in Harlem (NYC), The National Museum of African American History and Culture (DC), The Whitney Museum (NYC), Brooklyn Museum (NYC), MoMAPS1 (NYC), SFMOMA (CA), New Orleans Museum of Art (LA), Centre Georges Pompidou (Paris, France), The Garage Center for Contemporary Culture (Moscow, Russia), and MUSA (Vienna, Austria).

Newsome’s work is in numerous public collections including the Studio Museum in Harlem, Whitney Museum of American Art (NYC), The Brooklyn Museum of Art (NYC), The San Francisco Museum of Modern Art (CA), Los Angeles County Museum of Art (LA), McNay Art Museum (TX), and The New Britain Museum of American Art (CT). In 2010 he participated in the Whitney Biennial (NYC), and in 2011 Greater New York at MoMAPS1 (NYC). His many honors and awards for his work include the 2017/2018 Pollock-Krasner Foundation Grant, 2017 Rush Arts Gold Rush Award, the 2014 Headlands Center for the Arts Visiting Artist Residency, a 2011 The Louis Comfort Tiffany Foundation Award, a 2010 Urban Artist Initiative Individual Artist Grant, and a 2009 Rema Hort Mann Foundation Visual Arts Grant. rashaadnewsome.com