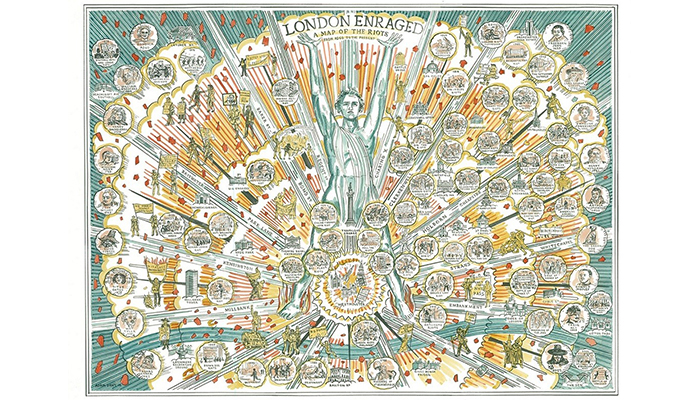 Adam Dant is a contemporary British artist known for his visual narratives realized through elaborate and intricate pen-and-ink drawings. He has won praise from The Guardian and Financial Times for his Hogarthian graphic style. Among the artists that have inspired him, Dant lists Albrecht Dürer, Pieter Bruegel the Elder, JMW Turner, George Cruikshank, Edward Burra and Saul Steinberg. Critics have most often liken Dant to William Hogarth, whose 18th-century satirical prints were created with a moral purpose in mind. His pictorial social commentaries are well-researched and studied, and imbued with wit and humor. “Mine are underpinned by subversion,” Dant says, “dressed up in traditional clothes.”

Born in 1967 in Cambridge, England, Dant attended the Liverpool School of Art, where he studied Graphic Design, and after pursued a Printmaking MA from the Royal College of Art. In 1995, Dant created the Donald Parsnips Daily Journal, an art world pamphlet, that appeared daily for five years. Dant subsequently made a reputation as the creator of “mockuments”. These are works based on floor plans of the Louvre, the National Gallery and Tate Britain, in which flowcharts lead from image to image to create a psycho-history of the institution being anatomized. In 2002 he won the Jerwood Drawing Prize for his Anecdotal Plan of Tate Britain. He was named Election Artist by the UK House of Commons for the 2015 General Election—traveling across the country to illustrate the electorate.

Currently living and working in London, Dant has work in the collections of the Victoria and Albert Museum, New York’s Museum of Modern Art, the Musee d’Art Contemporain in Lyons, The New Art Gallery Walsall, the Deutsche Bank and UBS collections, and in many leading private collections including that of Charles, Prince of Wales. He has exhibited at Tate Modern, the Hayward Gallery, The New Art Gallery Walsall and the Institute of Contemporary Arts. Dant has produced a contemporary almanac as part of Waddeson Manor’s 2017 exhibition, Glorious Years: French Calendars from Louis XIV to the Revolution.