Cartooniversity: UW-Madison is finding all sorts of ways to incorporate comics into the curriculum by Jay Rath 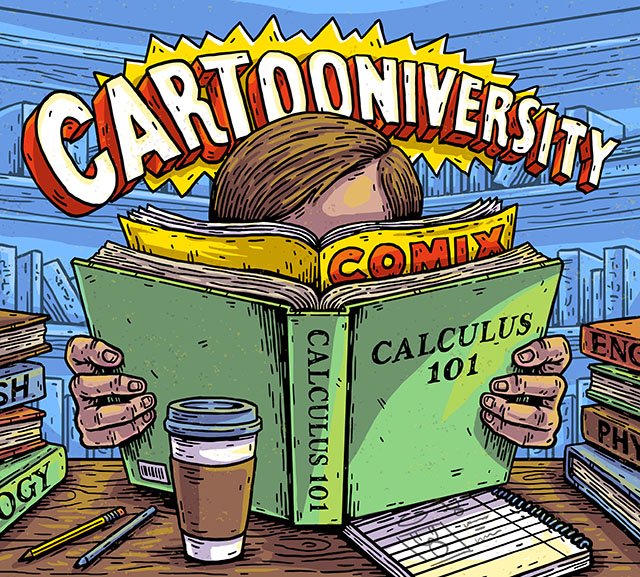 I had always, always wanted to be a cartoonist. When I was little, I thought the four greatest people on earth were God, Santa Claus, Charles Schulz and Walt Disney. Later I was disappointed. While three were creators, only two were cartoonists.

When I arrived at UW-Madison in the 1980s there was no way to study cartooning. So, to make money, I chose a related field: journalism. I haven’t regretted it, but sometimes I feel as if I’m Amish, preserving a vanishing way of life.

Meanwhile, cartoons are more popular than ever, increasing their hold on TV, movies and gaming. Gross revenue for the top 300 comic book titles is $248 million a month. Variety reports annual sales in excess of $1 billion — not including all the properties inspired by comic books (and leaving out newspaper and magazine cartoons).

And now there is a way to study cartooning at UW-Madison. A variety of wildly successful classes and workshops may in the near future be unified as a comics studies minor.

“I think the future looks very bright,” says Adam Kern, UW professor of Japanese literature and visual culture in the Department of Asian Languages and Cultures. “There’s such a critical mass of student interest and, as we’ve learned, faculty and community interest, that it is high time that we launch a comics studies minor.”

Technically, it would be referred to as an undergraduate certificate program. Kern plans to pitch it to UW leadership in the fall. “It takes time for something like this to go through the academic food chain.”

Read more at The Isthmus