While I remember where and when I came to possess most of my books and other written and printed ephemera, there are some that I simply cannot recall the path by which they came to be on my shelf. Often, like in this moment, I look for a book that I know I have but simply cannot find it. I know the book inside and out, can quote its pages, but cannot locate the volume. I am thinking about (and looking for) my copy of Derek Jarman’s Garden at the moment. As garden season arrives, I realize this is a common practice; I look for and through a number of gardening books as I begin to think about putting in my own garden. I also think about who gifted those books to me, or how I came to own them, and the conversations that accompanied the exchange. 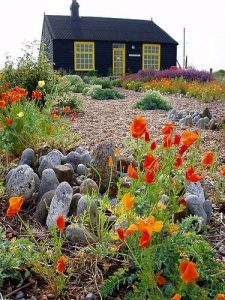 Gardening seems to be a shared passion for many artists, either in practice or otherwise. Gardens are places of contemplation with, depending on their locale, short periods of visible activity and long spells of fallowness. For Derek Jarman, the artist and filmmaker known for his avant-garde films such as Caravaggio and Blue, as a designer of theatre sets and costumes and as a writer, gardens hold immense potential, fraught with possibility. He noted, “Paradise haunts gardens, and some gardens are paradises. Mine is one of them.” Jarman chose as the site for his garden and cottage the most inhospitable environment imaginable: an expanse of “coastal shingle” formed of deposits of rounded pebbles in Dungeness, Kent in the UK, a place with little actual soil and near constant wind and weather. Yet his garden persists even today, some twenty years after his death, now tended by volunteers who make pilgrimages to the site to tend and care for Jarman’s vision. In the UK gardens are immersive experiences, a way of life that may or may not produce food, but often engages one’s poetic self in the work of gardening, the labor and the curation of the space. 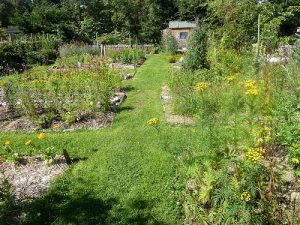 Some years ago I found myself at Findhorn, an almost mythical intentional community located in northeast Scotland on the Moray Firth coast. It is built around core spiritual ideas, communal living and has become known for its food producing gardens, which, like Jarman’s, exist in a landscape that was never expected to support such an enterprise. When I travelled to Findhorn, having heard about the legendary success of their gardens against all odds, I was expecting to see the sort of gridded and manicured vegetable patches that I myself gravitate toward; the kind of garden that vanquishes the natural order of the soil and to an extent, even nature itself, to triumph with seasonal bounty. However, as I approached the area where the gardens were nestled, I was lost for a moment. My expectations of a modernist gridded space that imposed itself onto the geography of the site, was instead populated by something like the overgrown, shared community gardens I see around town that seemed to have gotten away from their tenders. My own expectations of what constituted a “proper” garden were, of course, immediately unmoored. My idea of a garden, using my own metrics as a model, suddenly seemed severe, even corporate.

In Michael Pollan’s book, The Botany of Desire, the author tells a story of how plant life imposes its own sense of beauty, its needs and desires on us, and the people who seek to control and to organize such things to suit our own are often antagonistic desires. He writes of finding himself in an apple orchard in upstate New York, which is a living archive of most of the genetic family of apples all the way back to the origin of the species. Standing in it’s midst, he notes:

I’d never seen an orchard of apple seedlings…though it is hard to imagine another seedling orchard quite so crazed by diversity. No two of the trees looked even remotely alike, not in form or leaf or fruit. Some grew straight for the sun, others trailed along the ground…I saw apples with leaves like those of linden trees, others shaped like demented forsythia bushes. Maybe a third of the trees were bearing fruit—but strange fruit that looked and tasted like God’s first drafts of what an apple could be.

Though not exactly a garden, the orchard Pollan describes is an index of the way nature often overwrites expectations. It is not so different than the way in which artists wrestle with material, language or their own bodies to impose some sort of order out of the chaos or randomness at the junction between idea and action. I am drawn to the metaphor of “bearing fruit.” Thinking about a garden as a space of possibility, in the way that a reel of film or a stone or a digital device is also a space of possibility connecting those worlds for me. Randomness, chaos, and order, connecting a jumble of expectations and an often unexpected outcome.