Art, like life, is full of recurring themes, variations on historical models and thematic evolutions. Those moments that create iconic visual images or objects are the very stuff of ephemerality; they are gaussian and recurring, yes, however the dependability of when they may recur is the great unknown. Given similar circumstances and materials, it is ever unlikely that we would even be aware that the thing we are contemplating at the moment may become iconic in the future. Yet, artists persevere conscious of both the past and the present and imagining the future. 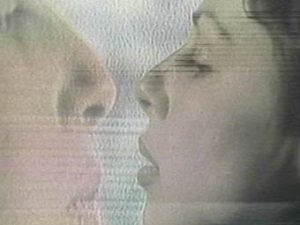 In 1973, Lynda Benglis created a 12-minute video that merges her recorded self with her (at the moment) “live” self, the two versions of Benglis compressed into one screenic image. In the tape, we see Benglis interacting with her video self and issuing emphatic commands such as “now,” “start now,” “this image here,” and “start recording.” The gesture is largely futile; the reaction time between the spoken command and its response will necessarily lag, marking “now” as already past.

“As Benglis asks “Now?” and commands “Now!” she challenges the presumed neutrality of her medium and reveals the processes of review, direction, and selection that take place behind the scenes. In effect, she calls into question what is “now”…

For artists then, especially those concerned with their own moment in time, such work as that of Benglis exacerbates the “impossibility of ‘Now.'”

For the minimalist composer Steven Reich, the temporal, the circular, and the repetitive are gestures which make the point that marking the present is an aspirational impossibility. Does a work of art mark the moment of inspiration, the gesture, the moment of completion or beginning, or does it graph the very idea of itself?

It was shortly after the Cuban Missile Crisis and the Cold War was still alive and well. Reich was drawn to the metaphor of the biblical warning about a great flood in the context of the Cold War and the existential threat to the planet posed by the political tension of the time. As he set about creating a composition based on the recording, in which he simultaneously played two identical reel-to-reel loops, the recordings began to lose synch. As one loop incrementally sped-up and the other slowed down, the phenomena exposed the slippages that occur in our understanding of any point in time; there is no fixity and esthetic pleasure is often derived from mistakes or accidents of circumstance. As Lane Relyea notes in his publication, After Criticism, such is the case with most fixed evaluative criteria, as we watch it “crumble one after another.” Relyea goes on to note, “We are asked to contemplate a great plethora of possibilities… that must now be used to draw a line around the art of the present.”

How do we begin to know these new narratives of the present? One way is through the writings of contemporary scholars whose mission is to create new knowledge, sometimes from old materials. And from artists themselves, and by curated exhibitions presented by museums and galleries, and certainly from our own research and experience. The art world, or a vocal part of it, has undertaken what is essentially a reformation of the nature of art since the mid-20th century. In fact, much of the critical push-back against contemporary art uses as its point of departure a modernist art world, constructed as it is of iconic visual culture. Perhaps our job is to identify the moment for ourselves in this part of the historical continuum. That may be, as in the case of Reich and to some extent Benglis, by being available to the accident, to the slippages in what we wish for from a work of art and what we get from the same work of art.