I was recently asked if I had a definition for the word art. I think, speak, and write about art constantly, but the question was, at the moment it was asked, unanswerable. I realized later that such a question is perhaps always lurking behind our conversations about art… What is it really? How do we define it in a way that is reductive, essentialist, and logical? It is actually a terrifying question as it eschews any sense of personal valuation or esthetic prerogative. It is like being pinned against a wall; get it right and your credibility is intact, get it wrong and you have outed yourself as a poser or a dilettante.

I’ve heard art defined as a form that exceeds use. It is also perhaps, a form that exceeds definition. It can seemingly range from a simple spasm of self-expression, a reinforcement of one’s presence on the planet to an unrealized idea or a realistic representation of the world through material mastery. One can dodge the question altogether preferring to rely on the idea that art is simply unknowable. However, for philosophers, accepting that something is inexplicable is generally “a philosophical last resort.” Plato thought that the arts needed to be representational or mimetic. As such, artworks are/were only ever an appearance of what is real, lacking in real knowledge and suspect in their morality. Kant defines art as, “a kind of representation that is purposive in itself and, though without an end, nevertheless promotes the cultivation of the mental powers for sociable communication.” Thus for Kant, art is a gesture toward the production of knowledge through social interaction, a catalyst for the betterment of civilization through the formal elements of composition.

Taken together, these philosophical understandings of art still overlook the historic avant-garde and the way in which art itself is re-imagined as a constantly evolving form of human expression. 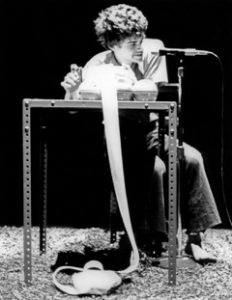 In 1973, Christopher Knowles (now a poet and an artist) was 13 years old and living in a facility for “brain damaged” children in upstate New York when the avant-garde theater director Robert Wilson met him. Wilson recognized in Knowles some of his own struggles with language and syntax (he had grown up with an auditory-processing disorder and a severe stutter). In a 1984 documentary about Einstein On the Beach, his historic collaboration with the composer Phillip Glass, Wilson recounts how the young Christopher Knowles came to write the libretto for the work.

Knowles’ text was his answer to Wilson’s question about Einstein, but the answer existed in a poetic, incantatory world outside of any notion of the expected, normative response.

Wilson and Glass used the text as the libretto for their four-hour production of Einstein on the Beach, an epic and free-form collaborative dance/opera spectacle that initially confused its audience, though is considered a watershed moment in interdisciplinary art-making. Knowles enigmatic text helped define the opera as something heretofore unseen on stage.

After thinking about it for a few days, I returned my answer to the question, what is art?, as follows:

*Art is the physical manifestation (reification) of a creative impulse or idea.

Thinking about my own attempt to define art, I am not sure if I succeeded. I suspect I did not. Putting a definition to the question can only ever be a letdown. Definitions by definition, are devoid of the things that give art life. They simplify and essentialize, they rely on description rather than experience, and they are intentionally safe; they position themselves on the edge of logic and desire. My definition is partially what I want art to be and largely what I know art is; nether of which approaches the physical sensation that art inspires. To study a subject that seems to defy an embodied understanding of what it is and why it isrequires a particular kind of leap into the void. Speaking about why he makes art given its unknowability, the painter Julian Schnabel has stated, “You have to have this infinite belief that is not rational…it’s blind faith.” 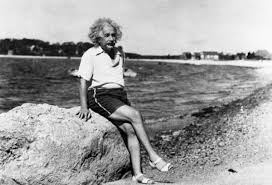 Photo of Albert Einstein on the Beach, 1945

Yet we continue to ask the question, similarly to the way in which Robert Wilson asked Christopher Knowles, “Who was Einstein?” The difference here is that Knowles’ response was unbound by convention or logic; it was the response of an outsider who was privy to an expanded sense of the universe, not dissimilar to the way in which Einstein himself conceived of it.