Museums are perhaps the most comforting spaces for me. Full of objects and art, thoughtfully arranged and displayed and, depending on the choices of the curators, often exhilarating to pass through. While museums vary in architectural style and in the type of objects they collect, index, and exhibit, there are certainly shared elements that connect them regardless of geographical location. The best ones tend to take me out of myself, suspending the viewing experience in an almost amniotic space of contemplation, where, through both the choreography of the experience and the esthetics of the experience, I am forced into a contemplative relationship with the objects before me and I become a bit of a flâneur, or what Baudelaire called, a “passionate spectator.”

I spent some time with friends at the Getty Museum in Los Angeles recently, a museum whose permanent collection I am not too familiar with. However, the sheer magnificence of the built environment, the structure itself, that simultaneously houses a massively moving collection of historical treasure and also offers a vantage point of the city of LA that is both breathtaking and privileged, is a flâneur’s dream. That the museum itself is open and free to the public and offers all of the citizens of Los Angeles (and the world) the opportunity to be illuminated, to stand in the space of extraordinary philanthropy and in the collections of handmade things and Objets d’Art, is a confluence of multiple purposes.

The exhibition that we spent the most time with is titled Outcasts: Prejudice & Persecution in the Medieval World. Outcasts focused largely on Medieval illuminated manuscripts, set in dimly-lit vitrines and opened to particular passages that the curators chose to illustrate a thesis. What was particularly noticeable in the installation and design of the exhibition was that the signage in the Getty is incredibly self-aware. The curators and the institution introduce the viewers of these collections with texts that are self-critical and post-modern in the most progressive way. The wall text makes note that what we are looking at in these collections may not align with the values or sense of self that each viewer brings to the experience of the objects before them. The introductory texts suggest that our understanding of these objects is evolving and that there is new knowledge in the tapestries, manuscripts and objects that may be seismically different than what we have been taught or assumed for all of history. 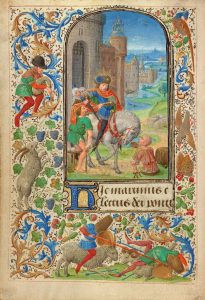 Wealthy patrons included images of Christian charity in their books, but such pictures often appeared alongside satirical images of the poor and disabled.
Saint Martin Dividing His Cloak in the Prayer Book of Charles the Bold, 1469, Lieven van Lathem, Ghent and Antwerp. The J. Paul Getty Museum

Given what we know through semiology and decades of such deconstructed understandings of meaning, this all may seem obvious. However, the gesture that the Getty makes to viewers as they enter the exhibition spaces is both generous and telling. It makes a statement that we are not there yet, that simply giving historical artifacts a pass in regard to images of sexual violence or cultural assumptions, imperialism, colonialism, or the overt display of wealth and privilege as a means of suppression or oppression, is not sustainable. Even while elevating the collection via its fitness for exhibition, the Getty hedges its own relationship to the objects thusly:

Medieval manuscripts preserve stories of faith, romance, and knowledge, but their luxurious illuminations can reveal disturbing narratives as well. Often created for the privileged classes, such books nevertheless provide glimpses of the marginalized and powerless and reflect their tenuous place in society. Attitudes toward women, Jews and Muslims, the poor, those perceived as socially divergent, and foreign peoples beyond European borders can be discerned through caricature and polemical imagery as well as marks of erasure and censorship.

This self-critical deconstruction of the manuscripts reinforces what some viewers may have identified for themselves, either through missing images of themselves throughout art history or the damaging portrayal of the “other” in that history, both which reinforce marginalization from the very works of art we typically see in such museum exhibitions. The Getty does a great service by illuminating such omissions and using contemporary theory and language to unravel such tropes.

This is the responsibility of the museum in contemporary culture: to apply what we know in the current era—about gender, class, race, and privilege—to the vast historical index of art made up to this point. In doing so, we can both understand and elevate the discourse of the present.