The experience of art itself is a social function.

Richard Serra is an artist whose career spans multiple media and approaches to artmaking. He is perhaps most well known to a particular public as the architect of the infamous Tilted Arc project in New York that stood between 1981-1987. 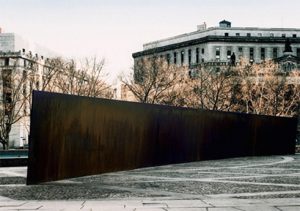 Tilted Arc was a 12-foot-tall, 120-foot-long, 15-ton steel slab that cut across Federal Plaza in Lower Manhattan, that in many cases forced those on their way to work to take a different path to their destination in order to get around the massive corten steel wall. Serra stated that he wanted the public to experience the sculpture in a physical way, and that the long, curving metal sheet would, “encompass the people who walk on the plaza in its volume,” thus altering their experience of the space they were attempting to navigate. However, the very public that Serra was seemingly attempting to engage, grew increasingly hostile to Tilted Arc.

Ultimately “the public,” along with various institutions, had felt left out of the process by which Tilted Arc arrived in its permanent site and organized a public forum to discuss the work. The ensuing storm of criticism led to the sculpture being removed in pieces and put in storage in 1989.

The writer Miwon Kwon notes that, “site-specific art can lead to the unearthing of repressed histories, [and] provide support for greater visibility of marginalized groups and issues.”

However, ironically perhaps, it can also have the opposite outcome; one in which the very nature of art and its ideas, materiality, and social function can become divisive.

As public art has stretched its own boundaries and the definitions of both “public” and “art” have undergone significant revision as well, it has evolved away from its historical mandate. In that light, even though Tilted Arc was created to ask thoughtful questions about public space, Serra’s work was brutish and confrontational. 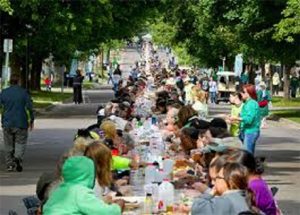 An interesting counterpoint to Serra’s work, albeit more ephemeral and situated in a much different conceptual space, is that of the artist Seitu Jones. Jones recently won the ArtPrize international competition in Grand Rapids, Michigan, for creating an outdoor meal for 250 guests in Grand Rapids’ Heartside Park. During the meal the guests sat at a 300-foot-long table, creating an instant and diverse community brought together around Jones’ ideas about food traditions, attitudes, rituals surrounding food. Jones is interested in what food teaches us about art, community, and culture, and imagines a living artwork that would ignite conversations about food, food access, and food justice in the core city with the idea of changing the urban food system.

While Jones’ work has structural similarities to Serra’s (a long line bisecting public space), the work is decidedly speaking to a different constituency. And in the end, Heartside Community Meal is dematerialized in the way that Lucy Lippard has described; the project decouples art from object and, simultaneously, separates art from its commodification. The “material” of art as Lippard describes, gives way to the idea of art and is re-materialized in the body.

Heartside Community Meal is a transactional work that lives in the participants it serves and given its temporal and materially slight footprint, virtually disappears of its own volition. Thus, it reinforces Serra’s idea, that, “The experience of art itself is a social function.”