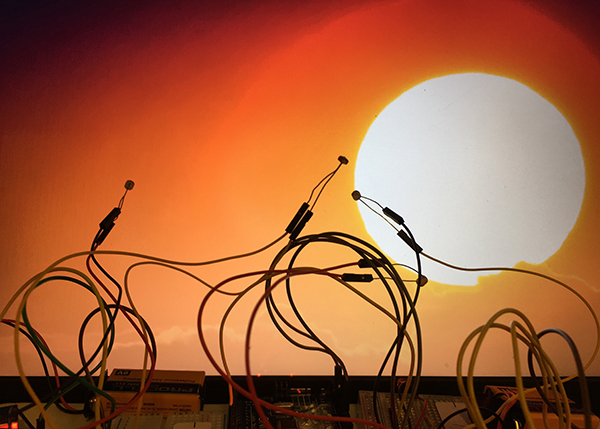 Available on personal mobile devices by visiting wynwoodradio.com (click on the Listen Live button), or the TuneIn Radio app (open TuneIn and search for Wynwood Radio), as well as on-site designated areas at the fair.

All programs will be recorded and archived, and can be enjoyed and shared throughout the year.

Untitled, Radio broadcasts two works by Claire Wilson, an sculptor whose works speak for themselves.

BuzzerBuzz features four light-sensitive buzzer machines, each programmed with a different pitch, intensity, and sensitivity to light. With their sensors resting on a computer screen, each machine’s sound is entirely determined by the brightness and movement of the image on the screen. In this piece, the buzzer machines are responding to time-lapse videos of the sun rising and setting―resulting in an interpretation of natural events altered by technology, expressed through technology. During the recording of this piece, a fly was attracted to the same computer screen―prompting a real-time synthesis of natural and artificial phenomena.

Encounters is a sound experiment between a fork-dragging sculpture, a hacked radio-turned-theremin, and other altered daily electronics. These hybridized noisemakers are programmed to reenact patterns found in human conversation. The sounds produced by the machines fluctuate throughout one day, oscillating between three modes: arguing, mirroring, and silence. This audio piece is a composite of the three modes, derived from three recordings of the day-long performance.

DIStopia looks at disability culture from the inside out. DIStopia is the podcast development by DisArt, is a multi-platform, culture building organization achieving its mission through an international disability art festival in April 2015 in Grand Rapids, Michigan. The mission of DisArt is to change perceptions about disability, one work of art at a time.

DIStopia’s program, produced specifically for this edition of Untitled, Miami Beach, will be hosted by DisArt’s Executive Director, Christopher Smit, and Jill Vyn.

Find out more at Untitled, Art