I’ve been thinking about the transition from drawing to cinema, how the practice of drawing from the live model informs ways of framing the body and establishes a kind of gaze that is recreated in cinema. 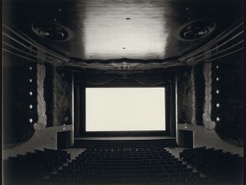 Since the late 1970’s Sugimoto has been making pictures by setting up at the back of landmark theaters and exposing the image for the duration of the film projected on screen. It is therefore nothing and everything contained in what seems to be pure light emanating from the screen.

Screens are aspirational spaces… we quite literally project our desires upon them and others—directors, performers, producers—simultaneously project their own such aspirations. Screens are a space of expanded imagination; we are inundated with screens and screenic content in our daily lives and most often experience them completely uncritically. They simply invade our space and demand attention. As one who works with screen media, I often muse about the compositional histories of film, video, photography, and other screenic performance. If we zoom out a bit and consider 2D spaces generally as screenic, we can include still images as well, across a number of media. I also think about what precedes cinema, and how the single frame of photography—and of course painting and drawing—establishes a way of looking at the body or at locomotion or movement; how it trains us and positions us as viewers prior to the leap to more seamless moving images.

The traditional drawing salon begins to frame our way of looking at the body long before photography or film technologies allow us to isolate such images in reproducible media. It also sets our relationship to the subject as it creates a system of consent for viewing the often unclothed or nude figure. It is thus outside of convention, a privileged experience for the artists, wherein a safe-space is assumed and honored.

Sitting, or modeling for the artists is a kind of performance. There are performances within this space that often go on as if in secret: clandestine, personal, moving, and gracious. The model enters the drawing studio, disrobes, and takes a pose. A dozen or so artists focus their attention on the model, intent on mining each shadow, line, and fold of skin for its graphic potential. The model however, is engaged in a different process, performing silence, grace, age, meditating on something unknown to those scraping charcoal across paper. People walk up and down the hall outside the closed door, unaware of the moment passing inside the room, or the collaborative performance taking place between artists and model. The artist’s gaze is, in this case is one of mutual consent. This is a gaze that is more utilitarian than art-world, functional and useful, almost medical. The model in the drawing studio is a catalyst for reflection, for meditation, for the practice of memorializing that body in that space at that time. The performance of the model in the drawing studio has been, in the end, mediated by the artists as they draw. The drawings are real time representations of the elongated moment of performance, yet do not circulate as documentation might. Rather they elide the performance and replace it with a new object of contemplation: the presence of the graphic representation itself, the drawing, now the record of the model’s gesture.

The drawing studio is a public/private space: one inhabited by a group of people (a public), yet closed off to other individuals or groups (another public). So, it is public space made private by consensus. Or, I suppose that could be inverted: a private space made public by consensus.

Either way, the model, while performing in public/private space, maintains a zone of personal safety and privacy by their gaze: the gaze of the drawer is not returned, but rather absorbed by the body, the eyes of the model focused elsewhere, neutralizing voyeurism and making the drawer’s gaze that of the third person in the cinematic or literary sense.

All of this leads, ultimately, to cinema and to the way that film creates a similar space for looking and for recording and for the ineffable moments in which the smallest gestures are “written” onto film in the process becoming larger than life, bigger that the eye could possibly see. Sugimoto’s overexposed, durational, photographic records of films in grand movie palaces are overwhelming, and in the end, such gestures disappear into the surface of the photograph.