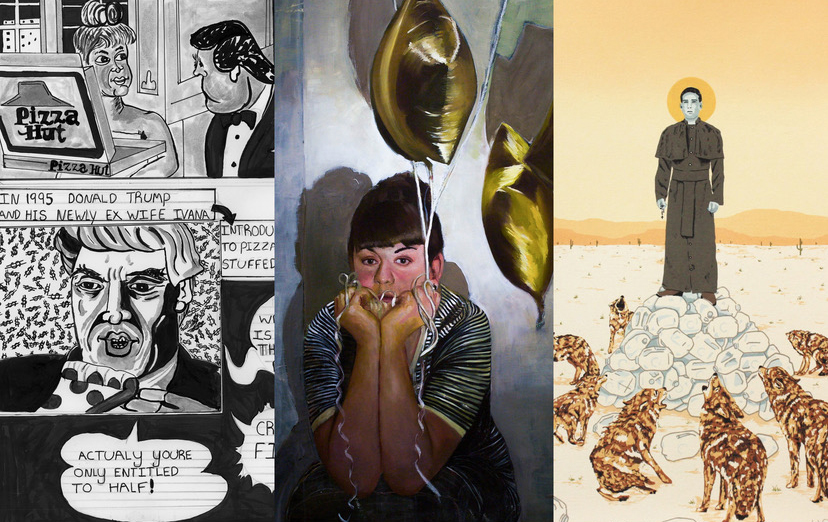 J. Leigh Garcia is an artist born and raised in Dallas, TX. Garcia received a BFA in printmaking from The University of North Texas (2015) and is currently pursuing an MFA at The University of Wisconsin-Madison (expected graduation- May 2018). “As a seventh-generation Texan and Mexican-American, my ancestral connection to Texas land has led me to an investigation of the ethical impact of my Tejano culture. Issues that current and future undocumented Latinxs face, such as harsh working conditions, the separation of families, and death while crossing the Mexico-U.S. border, cause me grave concern. Through the lens of my biracial heritage, I aim to shed light on these contemporary issues.” jleighgarcia.com

Jason Kartez, after years as a glassblower, shifted his focus towards conceptual-based sculpture, drawing, printmaking and is making his own comics. Kartez takes a critical look at popular culture and how it reflects and interacts with society. “Popular Culture is like a shadow being cast by light passing by an object in time and space. It acts as an index as to what the culture in which it came from values, or more truthfully what that culture fears it might lose. Just as, “shadow” as an image is only a distorted representation of the object that cast it, popular culture is a distortion of the culture it came from.” jasonkartez.com

Fikriye Oz, as a portrait artist, seeks to capture the essence of her subject. “While photography may capture the physical being, and abstraction may convey some form of deeper emotion, portraiture lands at this crossroads in portraying a subject and their inner being. Specifically focusing on mugshots allows the stripping away of clutter, a turning down of the background noise, to enable the subject’s humanity to captured in their expression, their gaze, and provides the viewer an insight into their lives. My work focuses on the juxtaposition between ones outer and the inner identity faced with the eroding effects of time.” fikriyeoz.com