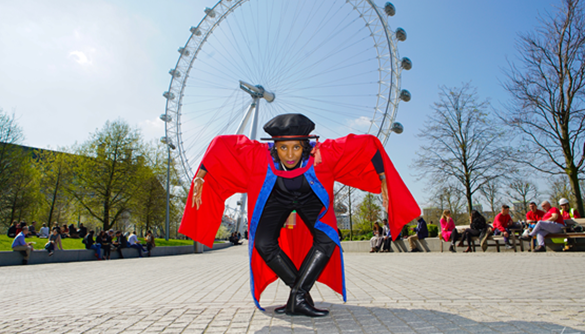 Dr. Wray, associate professor of dance at the University of California, Irvine, describes herself as a ‘Neo-African Performance Architect’. Receiving her PhD from the University of Surrey her interdisciplinary scholarship engages with dance, music, spiritual and community held knowledge. Developed into her praxis of Embodiology® which has application across the fields of dance and music, wellness, community engagement and leadership. In 2018 she will be the Interdisciplinary Artist in Residence at the University of Wisconsin, Madison and also later that year a Master Artist in Residence – at the Atlantic Center for the Arts in Florida.
In 2017 a new essay on Embodiology is forthcoming in an Oxford University Press publication on dance improvisation. In 2016 an essay introducing Embodiology’s concepts was published by Routledge in, “Black Routes in British Dance”, edited by Ramsay Burt and Christy Adair. Further dissemination of this method of how movement inspires the mind can be found in her TEDx talk entitled “Bodily Steps to Innovation” – see http://www.tedxorangecoast.com/videopick/sheron-wray-bodily-steps-to-innovation/
Sheron’s foundation is in dance performance and in the UK she was a member of both London Contemporary Dance Theatre and Rambert Dance Company between 1988 and 2001. Sheron is widely known for her role as the leading performer and legal custodian of Harmonica Breakdown (1938), choreographed by Jane Dudley. As its custodian she continues to restage the work globally and has just completed a motion capture research project funded by the UK Arts and Humanities Research Council. In 2013 she re-launched JazzXchange in the USA and was appointed guest curator of contemporary performance for the Monuments and Museums of Ghana.
And in 2015 UK’s National Resource Center for Dance invited her to place her archive within their permanent collection. Between 1992 and 2004 Wray was artistic director of JazzXchange Music and Dance Company, collaborating with musicians including Wynton Marsalis, Gary Crosby and Julian Joseph from whom she received a commission to choreograph The Brown Bomber, for the Olympic Arts Festival at the Southbank Centre. As a result of her NESTA fellowship intersect in her concept of digitally enabled improvisation which manifests in the award-winning Texterritory. Texterritory is an interactive performance platform created in collaboration with Fleeta Siegel. Recent productions include Texterritory Congo, Digitally Ever Present and Texterritory USA.