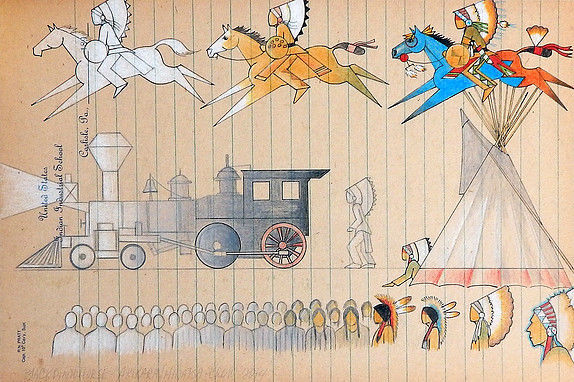 Native American history and art are at the heart of a trio of exhibits at Edgewood College Gallery in The Stream, 1000 Edgewood College Drive. “Re-Riding History: From the Southern Plains to the Matanzas Bay,” “The Art of Ho-Chunk Basket Making,” and “John Hitchcock: Protectors” will be on display until Feb. 26.

At the core of “Re-Riding History: From the Southern Plains to the Matanzas Bay” are historical events that defined a century of the U.S. government’s policy of assimilating American Indian people. One of the earlier events involved leaders of the Plains tribes — Cheyenne, Kiowa, Comanche, Arapaho, and Caddo — being forcibly removed from their homes in Salt Fork, Okla., and transported by train to Fort Marion in St. Augustine, Fla. There, the 72 men were imprisoned for their involvement in the Red River Wars in Indian Territory, now Oklahoma.