In the digital world art has gained traction not only for its own concerns, but also for its ability to illustrate the concerns of others as well; it may be the perfect metaphor of waiting for an increasingly visual and essentialized culture. Through history artists have moved into the fraught arenas of race, gender, class and other such territories. Artists are early adopters of both technology and progressive thinking. We continue to occupy those spaces. While not a monolithic group, “artists” notice the world with a particular sort of sensitivity. Such sensitivity leads to an understanding of the moment, the space and the conditions of the local and the global that makes it difficult to ignore inequities or inequalities. Out of such sensitivities come big ideas or equally important small ideas.

The power of ideas to rise up in the midst of digital chatter is a continuation of art’s ability to frame important narratives in the pre-digital world. I have been looking back at the artist Mierle Laderman Ukeles whose work is currently on view at Queens Museum in New York. Her work is built on the foundation of her Manifesto for Maintenance Art 1969! which read, in part:

I am an artist. I am a woman. I am a wife. I am a mother. (random order). I do a hell of a lot of washing, cleaning, cooking, renewing, supporting, preserving, etc. Also, (up to now separately) I ‘do’ art.

The New York Times notes, “Ms. Ukeles is probably most familiar for her nearly four-decade stint as official, though unsalaried, artist-in-residence with New York’s Department of Sanitation.” Speaking about the current exhibition, the piece goes on to say, “What the show gives us, though, is something less easily packaged: a conceptualist who has always grounded far-looking ideas in here-and-now situations and things, and a social revolutionary who understands the power of service.”

Calling into question such gendered roles and imbuing the idea of art with issues of equity and class, made Ms. Ukeles “big idea” a point of tangency for generations of artists. 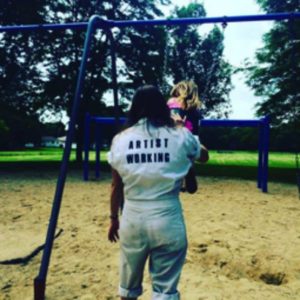 Current UW Art Department Graduate student Rebecca Kautz is nearing the end of a one-year project called Artist Working in which she explores similar issues to those of Ukeles, though with a focus on mothering, caregiving, and the role of “work” in the larger discourse surrounding art.

Rebecca’s dedication to her own big/small idea has been Sisyphean.

If you see Rebecca wearing her Artist Working jumpsuit, please take a moment to ask her about her project, initiate a conversation with her. The critic Michael Brenson notes:

I believe in conversation. In the best conversations, no one is used; ownership is shared. Everyone leaves with a sense that the ideas exchanged belong to each person present. Everyone leaves respecting those who were part of the exchange, whether or not there was agreement.