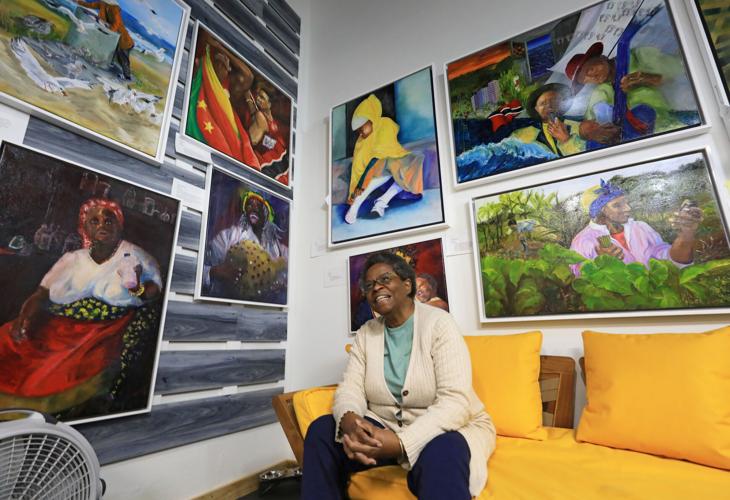 At Mary Made It Studio, located at 2716 Atwood Ave., vibrant paintings line the tall white walls.

The paintings feature vivid landscapes from the twin islands of Trinidad and Tobago.

All of these works tell a story, and many of those stories stem directly from the memories of artist Mary Gill [BS-Art Ed ’78], the woman behind the canvas.

“Everything here has a story. Every single one,” Gill said as she gestured toward her paintings. “I keep on going back to Trinidad all the time.”

Gill, who grew up in Trinidad, has spent much of her adult life traveling back and forth from her homeland to the American Midwest to pursue a career in art education. After receiving her bachelor’s and master’s degree in art education from UW-Madison, she went back to Trinidad to teach for several years before returning to Madison to receive her doctorate. In 1996, following her graduation, Gill taught for 10 years as a professor at Western Illinois University in Macomb, before briefly moving in 2006 to Atlanta, where she began to take oil painting classes, sparking her love for the medium.

“Until that time, I was painting, but I was just sort of dabbling. I was more involved at the time with fabric design,” Gill said. “But what I learned there opened up a different world and took me into painting.”

Due to the economic recession in 2008, Gill said, she lost “everything,” including her home in Atlanta, prompting her to return to Trinidad to take care of her sister, who had fallen ill. Soon after, Gill’s sister died, leading Gill to return to the U.S.