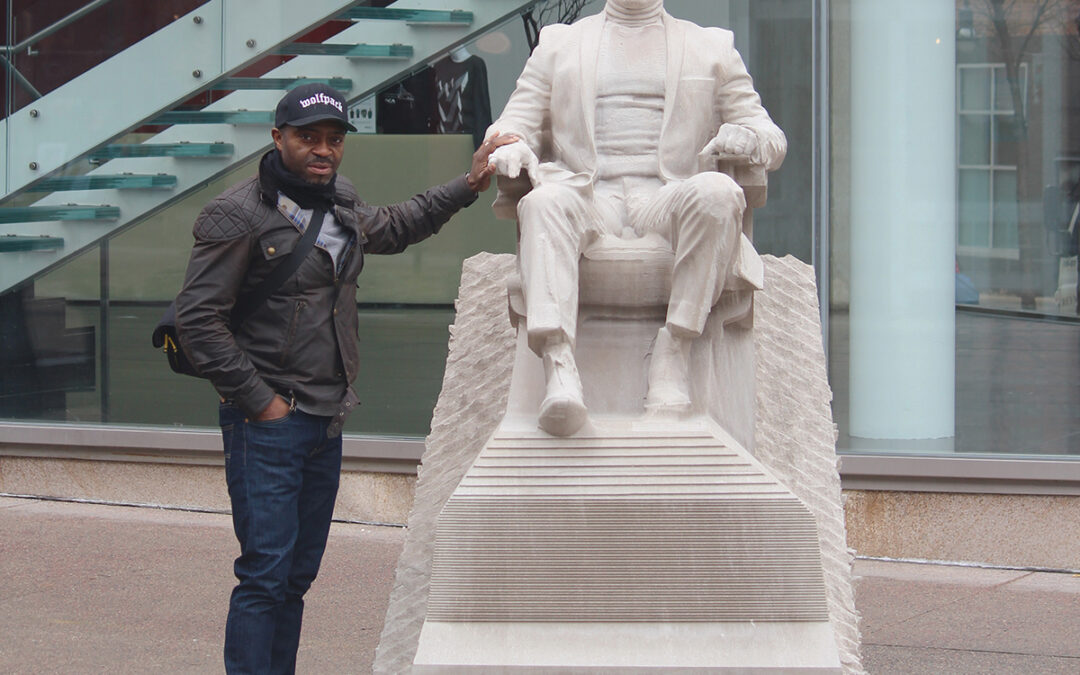 In his sculpture Blu³eprint, UW art professor Faisal Abdu’Allah portrays himself seated in a barber chair. If you’re walking down State Street, you’ll encounter the limestone monument outside the Madison Museum of Contemporary Art, which commissioned it for an exhibition of Abdu’Allah’s work.

Both figures have a commanding presence. Both gaze stoically, arms at rest. But one portrays a white man who embodies the United States’ complex racial history, sitting on what might as well be a throne; the other a Black man in the more modest setting of a barbershop. It’s a provocative juxtaposition, particularly at a time when many public monuments are coming under fire and occasionally even coming off their pedestals.

The country is divided over which statues should stay and which should go, but Abdu’Allah proposes an artistic solution. Rather than removing artworks, he believes in inviting sculptors of color to create what he calls “counter-monuments.” Blu³eprint, for example, engages in dialogue with the Lincoln statue, presenting an alternate approach to commemoration.

Abdu’Allah is a professor of printmaking and associate dean for the arts in the School of Education. Last year, he was named Chazen Family Distinguished Chair in Art. He’s come a long way since his days in London barbershops.

That’s right — Abdu’Allah’s choice of a barber chair is not random. He hung out in salons during his youth, marveling over patterns the hairdressers made with their scissors. He became a barber himself, attended the Royal College of Art, and began incorporating barbershop imagery into his work.

Read more at the OnWisconsin Fall 2022