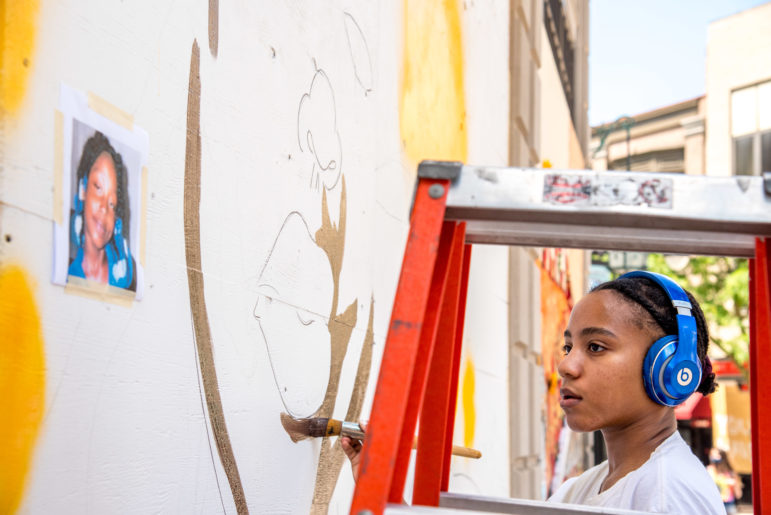 On May 31, the day after violence first broke out on State Street in Madison during demonstrations in response to the death of George Floyd at the hands of Minneapolis police, a transformation began.

Businesses up and down Madison’s defining corridor shuttered. Plywood sheets covered windows — some preemptively and some to cover windows already smashed by looters.

“It looked kind of dead before the murals,” said Amira Caire, a 22-year-old Madisonian and one of over a hundred artists who lent their time, talent and paint to an effort to decorate the barren spaces with colorful messages of pride, perseverance, anger, justice and unity.

The mural project began on May 31, when both the mayor and Common Council president contacted Madison Arts Program Administrator Karin Wolf to request a “rapid response” art program for the shuttered storefronts. Working with her program’s community cultural partners, Wolf reached out to artists who had worked with the city before. In the following days, as more businesses covered their windows, the Arts Program posted an open call for artists interested in participating in the project.

The mural project was funded through another program, Arts in Public Places Looking Forward, which had been established just a few weeks earlier to support artists who have lost income due to the COVID-19 pandemic. The Madison Arts Program also prioritized artists who had been affected by racial violence and injustice, Wolf said.

Shiloah Coley, 21, [Art Studio Certificate ’20] looks at a reference photo of Aiyana Mo’Ney Stanley Jones as she paints a mural outside the Overture Center in downtown Madison, Wis., on June 11, 2020. Stanley was seven years old when she was shot and killed in a police raid in Detroit, Mich., in 2010. Coley used Stanley and the likenesses of other young Black people killed by police as the inspiration for the figures in her murals. Coley, originally from the suburbs of Chicago, is a recent graduate from the University of Wisconsin-Madison, where she studied public art and the criminalization of graffiti and other forms of artistic expression. “I’ve always believed in the arts as a super transformative thing,” she said. “I wanted [this mural] to be two Black teenagers with a confrontational gaze. People need to reckon with Black people in this space and taking up space in Madison.”

Read more at the Wisconsin Watch