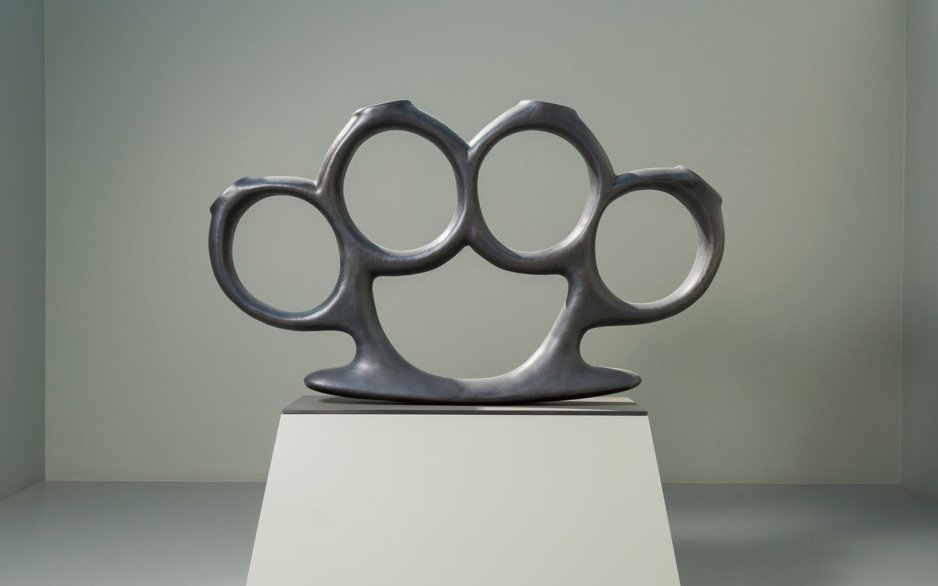 Ben Jackel‘s handmade sculptures deal with the history of war and its artifacts which are inherently but also subtly political in nature. Working primarily in clay, wood, and stoneware and imparted with a hand-rubbed beeswax finish that unifies the works, the artist explores the objects of conflict and emergencies from medieval-esque helmets and Norse weaponry, to World War I and II era military machinery like cannons, naval ships, and aerial machines, to a series of more common objects like a fire extinguisher, a fire hose, and sprinkler heads. Scaling these objects for a gallery space exposes viewers to objects from our own culture that they may not see without military service, inviting reflection on their role in our geopolitical reality that may otherwise go unconsidered.

Originally from Aurora, Colorado, Jackel is based in Los Angles where he sculpts and teaches ceramics at California State University, Long Beach, and restores brass aboard the Battleship USS Iowa in his free time. Jackel’s exhibitions include Reign of Fire at L.A. Louver in Venice, California and Providence of Night at Brandstater Gallery in Riverside, California. He graduated with a BFA from the University of Colorado Boulder, Colorado and an MFA from the University of California. Jackel is a member of the Durden and Ray collective, made up of 24 artist and curators who work together to create exhibition opportunities at their downtown Los Angeles gallery as well as in concert with artist groups and gallery spaces around the world.